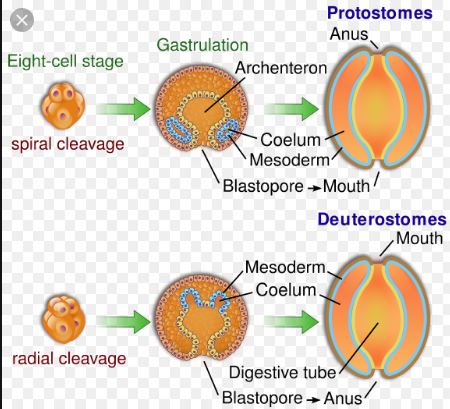 The embryonic development process is characterized by several stages, which vary between groups. Among the relocated animals, in one of these stages, we can highlight fundamental embryological differences that allow us to divide them into two groups: deuterostomes and protostomes.

During the gastrulation process , there is a rearrangement of cells, forming a tube called the archenteron, which will eventually originate the digestive tube . The archer communicates with the outside through a hole called blastopore . This, in some animals, gives rise to the mouth – in which case the animals are called protostomes. In the case of deuterostomes animals , the blastopore gives rise to the anus , and the mouth then emerges from a second orifice. Besides these characteristics, there are others that characterize these two groups, as can be observed below.

Among the deuterostomes (deuteron: secondary; stoma: mouth) are the phyla presenting radial cleavage – the cleavage or segmentation of the fertilized egg occurs parallel or perpendicular to the polar axis of the egg – and undetermined. In addition, they present an enterocele cello, that is, formed from folds of the intestine. The phyla are Echinodermata and Chordata.

Among the protostomes ( protos: first; stoma: mouth), we can highlight the phyla Arthropoda, Annelida, and Mollusca. These have a spiral cleavage – the cleavage or segmentation of the fertilized egg tends to be oblique or diagonal to the polar axis of the egg – and determined. The protostoma celoma is schizogenic because it is formed from cracks in the mesoderm.