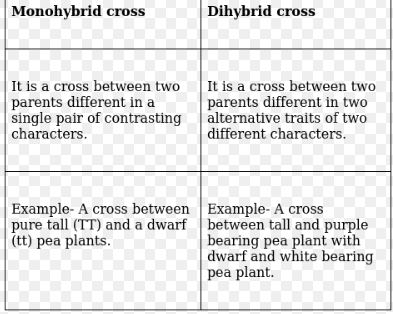 CROSSING MONOHIBRID Under the Laws of Mendelian Genetics, it is a cross between pure strains that only differ in one characteristic. Mating of two individuals, organisms or strains that have different genetic pairs for a single specific trait or in which only a certain characteristic or genetic locus is crossing.
CROSSING DIFFERENT Mechanism; analysis and interpretation by Mendel; postulation of the second Mendelian law and its genetic implications; interpretation of the crossing in the light of current genetic knowledge. examples of monohybrid crosses and hybridized crosses. Difference Between Monohybrid And Dihybrid