The biogeochemical cycle or cycling of substances is a pathway by which a chemical substance continuously moves through biotic (biosphere) and abiotic (atmosphere, lithosphere, and hydrosphere) components of Earth. These ensure a continuous supply of minerals and nutrients to the whole living world and thus help in sustaining life on this planet. The main biogeochemical cycles are the Hydrologic Cycle, carbon cycle, nitrogen Cycle, and Phosphorous Cycle.

What are biogeochemical cycles?

It is known as biogeochemical cycles or cycles of matter to the circuits of exchange of chemical elements between living beings and the surrounding environment, through a series of transport, production and decomposition processes. Its name comes from the Greek prefixes bio, “life,” and geo, “earth.”

In the biogeochemical cycles both different life forms (plant, animal, microscopic, etc.), as well as inorganic natural elements (rains, winds, etc.) are involved. They consist of perpetual displacements of matter from one area to others, thus allowing the recycling of the nutrients available in the biosphere.

By “nutrients” we mean all those elements or molecules whose presence in the organism of a living being is indispensable for the continuity of its existence and the reproduction of its species. It is usually between 31 and 40 different chemical elements, depending on the species, and is needed in different proportions. These nutrients can be of two types:

Biogeochemical cycles vary according to the properties of the element involved and therefore involve different life forms as well. 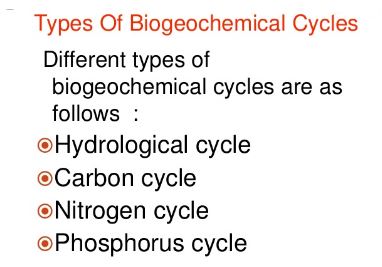 There are three main types of biogeochemical cycles based on the transporting agent for chemicals.

One of the main biogeochemical cycles, in which prokaryotic microorganisms (bacteria) and plants fix nitrogen in their bodies, one of the main gases in the atmosphere. It is essential for various animal body compounds, including humans.

The cycle can be summarized as follows:

The carbon cycle is the most important and complex of biogeochemical cycles since all known life is composed without the exception of compounds derived from that element. In addition, this cycle involves the main metabolic processes of plants and animals: photosynthesis and respiration.

The cycle can be summarized as follows:

The phosphorus cycle is the last and most complex of the main biogeochemical cycles, since phosphorus is an abundant element in the earth’s crust, in mineral form, but that living beings require essentially, although in moderate amounts. Phosphorus is part of vital compounds such as DNA and RNA, and its cycle can be summarized as follows: