What is the nitrogen cycle?

The nitrogen cycle is the biogeochemical circuit that supplies nitrogen to living things and keeps it circulating in the biosphere. It is composed of biotic and abiotic processes. Ammonium (NH 4 + ) and nitrate (NO 3 – ) form some of the most important presentations of this element, as well as atomic nitrogen in a gaseous state (N 2 ). 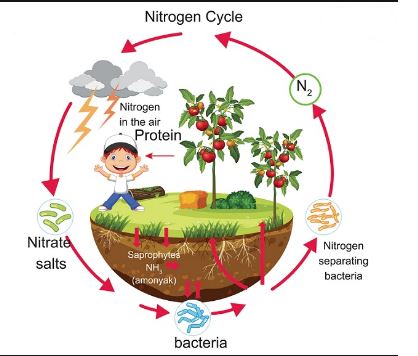 It is one of the most important biogeochemical cycles for the balance of life since nitrogen (N) is an extremely abundant chemical element in the composition of organic matter and in the Earth’s atmosphere (78% of its volume).

In this cycle the different levels of living beings, autotrophs and heterotrophs, the tiny decomposing organisms of organic matter, and the immense volume of nitrogen in the atmosphere are interrelated.

It can be summarized as follows:

It is a vital circuit for the existence of life as we know it since life forms as animals, plants and even humans are unable to fix nitrogen from its gaseous form (N 2 ), although we need it tremendously for our tissues.

For that reason, we depend on the manipulation of gas by other life forms, which are not less important by microscopic. This is how nitrogen comes to us through a long chain of transmission.

It does not vary much when it occurs in water, that is, on the surface of lakes, seas, and rivers. Nitrogen can reach the water by runoff, the result of human or natural fertilizers. In other cases, it is transmitted by marine trophic chains, in which many land animals are incorporated into the sea.

In any case, this entry of nitrogenous organic substances is distributed among the different predators, leaving a residue of nitrogen material on the ocean floor, where it is decomposed by various types of microorganisms. Thus, the microscopic cycle between nitrifiers and denitrifiers is repeated, and the gaseous nitrogen is released back into the atmosphere.