Difference Between Erosion And Weathering is that Weathering is the chemical and mechanical phenomenon that breaks and sculpts rocks; erosion, however, drags the remaining fragments, leading them away. You can define the erosion and degradation and transport of the soil or rock which produces different processes on the surface of the Earth. 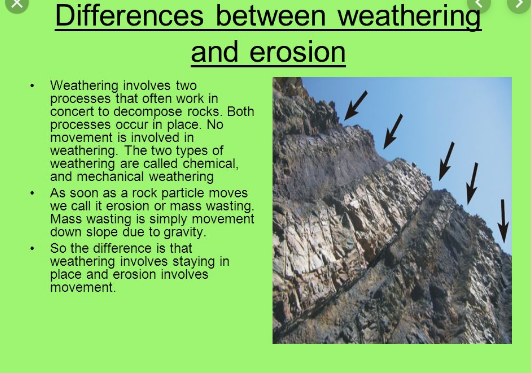 Every relief structure suffers, from the moment it stands out, the attack of the different erosive agents. The structure presents erosion zones and accumulation zones, here we will deal with erosion.

Although sometimes used as synonyms, the truth is that erosion is not the same as weathering. Weathering is the breakage or disintegration of a rock on the surface of the Earth. Erosion includes, in addition to weathering, the transport of the material to the accumulation zones.

The weathering covers all the processes that prepare the rock for its fracture into small pieces. It is called weathering because the main agents that act on the rocks are climatic meteors: temperature, water, ice, wind, etc. The effectiveness of each of them depends on the frequency, its combination in the climate and the mineral characteristics of the rock. On the other hand, there are three ways of acting on the rock: physics, chemistry, and biology. Thus, we will have a mechanical weathering, a chemical weathering, and a biological weathering

Mechanical (or physical) weathering consists of the breaking of the rocks due to external and internal mechanical stresses, mainly wedge movements and movements. The most important processes are thermoclasty, gelation, hydroelastic, phalloplasty, and corrosion.

Chemical weathering consists of the breakdown and breakage of rocks through chemical reactions. This happens through two basic processes of dissolution and alteration.

Biological (or organic) weathering is caused by the activity of animals and plants. It presents a combination of mechanical effects (expansion of tree roots, movements of rocks by animals, etc.) and chemical (due to the acids that living things contribute to the soil).

Each of these erosive agents acts together with the others. Depending on the weather, some are more frequent than others or act in different seasons. The set of processes that form the relief is called the morphogenetic system (morph: form, and genetic: origin; the origin of the forms). The combination of the morphogenetic system with the climate is called the morpho-climatic domain, which is, in the end, the true creators of the relief.