Difference Between Estrogen And Progesterone is that The female sex hormones have been a real unknown, but are equally or more important than the male hormones . Various studies conducted in recent years have investigated how sex hormones affect libido. Women, unlike men, are affected by the menstrual cycle, causing hormones to react differently depending on the period they are in. 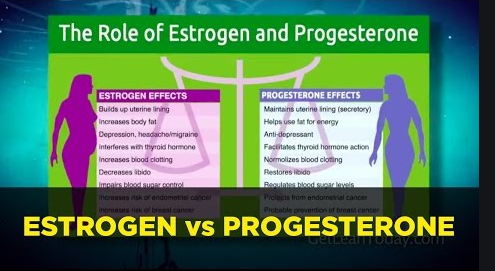 Hormones are soluble substances produced in very small quantities in certain organs of the body that, through the blood, reach other distant organs and regulate their function. Female hormones also regulate the function of the female genital tract . There are two types of female hormones: estrogen and progesterone .

The production of female hormones begins already in the intrauterine stage. Their levels are low during childhood, being during puberty when their production is increased. Female hormones are essential for fertilization, implantation, pregnancy and childbirth to occur during adulthood.

Estrogens are produced in the ovaries. This female hormone is responsible for maturing the female genital tract to make it fertile. Estrogens also produce an increase in breasts, hair and nail growth, fluid retention or changes in the venous system.

This female hormone is formed with the cyclic rupture of an ovarian follicle. It is necessary for the uterus and breasts to develop and function properly. It acts during the second part of the menstrual cycle, slowing the endometrial proliferative changes caused by estrogens.

That is, during the early stages of the menstrual cycle, when fertility is high, women have a greater sexual interest. However, as the maturation of the ovum approaches, the woman loses that interest. The menopause also is characterized by a decrease in estrogen production. However, and contrary to what was thought, testosterone does not affect the libido of women. Although it can have positive effects on the hormonal replacement.