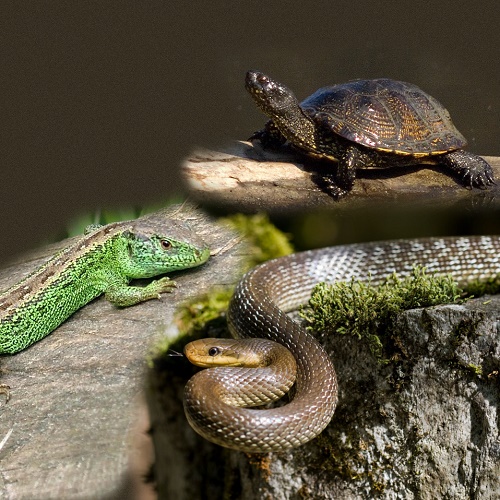 All reptiles are tetrapods, which simply means that they have either four members (like turtles and crocodiles), or that they descend from animals with four members (like snakes). More broadly, reptiles are vertebrate animals, which means they have backbones that hold spinal cords that run the length of their bodies, a feature they share with birds, fish, mammals, and amphibians. In terms of evolution, reptiles are intermediate between amphibians (who have wet skin and must stay near bodies of water) and mammals (which have warm-blooded metabolisms and have diversified in all habitats of the Earth).

Reptiles are amniote animals, which means that the eggs, laid by the females, contain an elastic bag inside which the embryo develops. Most reptiles are oviparous and lay hard-shelled eggs, but some squamate lizards are viviparous, giving birth to live young that develop inside the body of females. You may have the impression that only mammals are viviparous, but this is not true; not only do some reptiles give birth to live young, but so do some species of fish. Most reptiles differ from mammals in that they lack placentas, the tissue structure with which developing embryos feed in the womb.

3- The skin of reptiles is covered with scales (or scales)

The scales of reptiles, which develop from the epidermis (the outermost layer of the skin), are small hard plates made up of the protein keratin. Scales, like the shells of turtles and the armor of crocodiles, are similar in appearance and function like scales, but they are bony structures that form in a deeper layer of skin, the dermis. Scales and scales provide physical protection to reptiles and prevent water loss; in many species, the shapes and colors of these structures play a role in territorial disputes and courtship displays. Keep in mind that, although all reptiles have scales, this is not a unique feature of reptiles; butterflies, birds, pangolins, and fish also have scales.

With some exceptions (for example the leatherback turtle ), they keep skin covered with scales

One of the most important features of animals is the efficiency with which they collect and use oxygen, the molecular fuel that powers metabolic processes. All reptiles, including snakes, turtles, crocodiles, and lizards, are equipped with air-breathing lungs, although different types of reptiles use different means of breathing. For example, lizards breathe using the same muscles they run with, which means they have to hold their breath when they are in motion, while crocodiles have more flexible diaphragms that allow greater freedom of movement. In general, the lungs of reptiles are more advanced than those of amphibians but less sophisticated than those of birds and mammals.

Many reptiles molt and their skin is not “recycled”. This characteristic is almost no longer visible for many species of turtles and crocodilians.

With the exception of crocodilians, reptiles have a heart from which the two ventricles are not completely separated. However, even with an undivided ventricle, the mixture of blood arterial and venous is minimal. Turtles have two atria and a single ventricle.

Protective parental behaviors are particularly developed in certain snakes (Pythonidae and Elapidae) as well as in crocodilians and completely absent in other species such as sea turtles or most lizards.

Almost all reptiles are oviparous (lay eggs), but some are viviparous or ovoviviparous.

The current reptiles are poikilothermic and have retained the same occipital condyle located at the back of the skull and ensuring articulation with the first vertebra, whereas in amphibians and mammals, it is double. 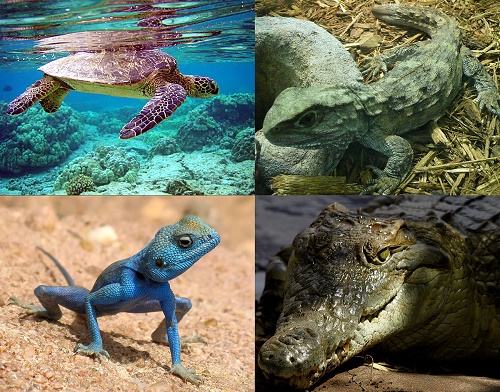 A reptile ( Reptilia in Latin) is a vertebrate animal, generally tetrapod, amniote, and member of the class of sauropsids.     “Reptile” means ”  crawling  “, although it is not a universal feature of this class.

The part of natural history dealing with reptiles is called herpetology (access to the list of herpetologists). The first animals to be classified as

reptiles appeared on Earth as early as the Carboniferous.

In today’s living world, they are