Difference Between Lytic and Lysogenic Cycle is that: 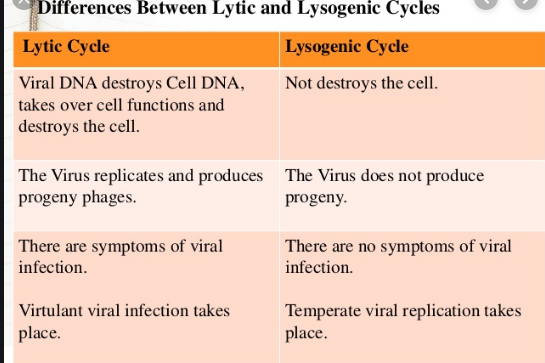 Subsequently, it contracts its helical sheath and introduces the tubular axis so that the DNA passes directly to the cytoplasm of the bacteria. l Multiplication phase.

The virus disrupts the normal functioning of the bacteria and bacterial DNA can be degraded. From this moment it will be nucleic acid of the virus that dictates the orders. The viral genes have the necessary information to, using the organelles and enzymes of the bacterium, making the virus’s nucleic acid and proteins. L Coupling phase.

The capsomeres gather to form the capsid, while the viral nucleic acid folds and penetrates into it forming new viruses. l Lysis or release phase.

The new viruses go outside due to the action of an enzyme that smooths the bacterial wall. Because of this, the wall ruptures and the death of the bacteria occurs and the viruses are free to infect other bacteria.

LISOGENIC CYCLE
These attenuated viruses, by infecting the host cell, do not destroy it, but the viral nucleic acid becomes incorporated into the cellular DNA.
The viral or profago DNA can remain dormant for several generations and thus reproduce at the same time as the bacteria until a stimulus leads to the separation of the prophage, which will initiate a lytic cycle.

Sometimes, when the profago is released, it does not do so by the same point by which it had been integrated and takes part in the genetic material of the bacteria.
When this virus infects a new bacterium, it will transfer said bacterial DNA fragment contributing to the genetic enrichment of this bacterium, leaving the virus in the form of a prophage.

This phenomenon is called transduction. Difference Between Lytic and Lysogenic Cycle