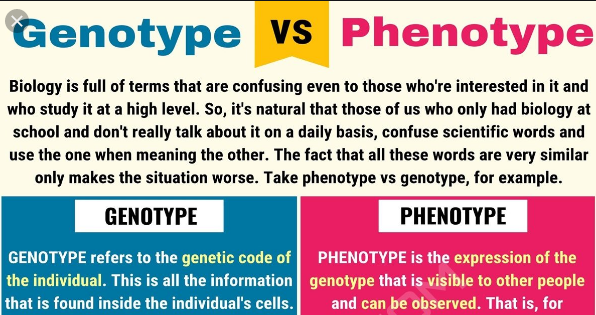 The phenotype depends on the genotype, and additionally, it can be influenced by environmental and nutritional factors.

Definition of genotype and phenotype

The genotype is constituted by the genetic composition of a cell. The genotype of an individual includes all genes that may or may not be expressed, that is, that produce a certain protein.

The genotype can be identified through several chemical tests that mainly consist in determining the genetic constitution of the individual. Among these tests we have DNA analysis tests, paternity tests and polymerase chain reaction (PCR), among others.

The phenotype can be identified by observing the characteristics of the individual. Sometimes these characteristics cannot be seen with the naked eye. For example, to determine the phenotype of the blood group of human red blood cells, a laboratory analysis is required.

Relationship between genotype and phenotype

The genotype of an individual comprises its entire genetic constitution. This includes dominant or recessive genes, regulatory sequences and what is known as junk DNA, which is DNA that is not yet known what it is for.

The phenotype is the result of genes that can be expressed and external factors that affect their expression: environmental, nutritional and chemical factors.

If we make the analogy of the genotype and the phenotype with a book, the genotype is the whole book: the leaves and what is written on them. The phenotype, on the other hand, is what we read in the book.

In organisms with sexual reproduction, sex cells or gametes have half the genetic load of the species. When a female gamete is combined with a male game, they complete the individual’s genetic load. Then, the genotype of this individual is the result of the combination of the genotypes of their procreators.

Although the phenotype is determined by genotype, and this by inheritance, there are other factors that affect phenotypic manifestations. For example, if a baby does not receive adequate nutrition during its first stage of life, it may not reach the height that was determined in its genes.

We also have the case of identical twins that have the same genotype but may have different phenotypes.

The phenotype of an individual may change during his life, depending on what genes are expressed and how external conditions affect them. For example, a young child with green eyes may have blue eyes after a while.