Major Difference between Arches and bacteria is that The archaea and bacteria are prokaryotes, unicellular living whose genetic material is not contained in an intracellular compartment.

Initially, archaea were considered bacteria, and in fact, they were known as archaebacteria. Thanks to Carl R. Woese’s studies and technological advances in genetic sequencing, archaea and bacteria were separated into different phylogenetic groups. Now living organisms are classified into three domains: 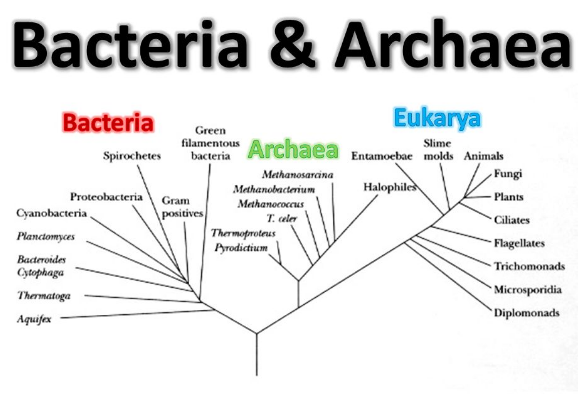 Archaea are microscopic organisms that were discovered just 130 years ago although initially they were thought to be bacteria. The archaea constitute the third branch of the tree of life, between bacteria and eukaryotes.

The first fully sequenced genome of an arch was that of Methanococcus jannaschii published in 1996.

Characteristics of the arches

The archaea have a structure similar to bacteria: circular DNA, plasma membrane, cell wall, cytoplasm, and ribosomes. However, the cell membrane of the archaea is characterized by the incorporation of isoprenoid lipids with ether bonds attached to a glycerol-1-phosphate base.

They have information processing systems such as bacteria and eukaryotes, that is, DNA replication, transcription, and translation, although they look more like the latter.

They are microscopic in size and can be as small as in the order of 400-500 nanometers. They have bacteria-like shapes: rounded (coconuts), cylindrical (bacilli) and irregular shapes. In fact, the first square microorganism ( Haloquadratum walsbyi ) was an arch discovered in 1980 on the Sinai Peninsula.

Archaea do not perform photosynthesis and do not form spores. They produce methane from biological compounds by the process of methanogenesis.

Archaea are beings that can live in extreme environments: o very high or very low temperatures. That is why they are qualified as extremophiles. However, not all extremophilic organisms are archaea, nor are all archaea extremophilic.

So far no pathogenic archaea are known, that is, that causes disease in animals or plants.

The classification of archaea as a distinct domain arose by Carl Woese’s studies in the late 1960s using the ribosomal RNA sequence as a marker. Thus, these organisms form a separate domain of bacteria and eukaryotes, Archaea domain, which in turn has several main divisions or row that grow as new specimens are studied.

Examples of Crenarchaeota are Metallosphaera sedula (isolated from a volcano in Italy) and Thermoproteus neutrophils ( found in hot springs).

A large number of families with varied habitats are grouped on this edge. For example, methanogens are found in anaerobic aquatic environments and in the gastrointestinal tract of animals, where they participate in the conversion of organic matter by using the metabolic products of bacteria (for example CO 2, hydrogen H 2, acetate and format) and convert them to methane (CH 4 ).

On the other hand, haloarchaeans live in hypersaline environments (such as salt flats, lakes and the Dead Sea) where they grow as heterotrophs, often in association with phototropic algae. The square arch Haloquadratum walsbyi is a halophilic representative.

To this group belongs Nanoarcheum equitans , the smallest arch (400 nm) found so far. It was identified as small points that grew next to another arch ( Ignicoccus hospitals ).

This division was recognized in 2008 and its members are widespread in medium temperature marine environments. An example is Nitrosopumilus maritimus , found in a tropical marine tank of the Seattle Aquarium, in Washington (USA).

Bacteria are prokaryotic unicellular microorganisms, that is, they do not have a nucleus defined by a nuclear membrane. It is widely distributed in the biosphere and were the first ancestral life forms.

In the human body, there are more bacterial cells than human cells. Bacteria that reside in the intestine are called gastrointestinal microbiomes and have a fundamental role in the individual’s state of health.

Of the great variety of known bacterial species, only a few are pathogenic for humans, the vast majority are harmless. Examples of pathogenic species are Haemophilus influenza (which can cause meningitis and pneumonia in children under five years old) and Vibrio cholera (which causes cholera).

The bacterial cell wall contains peptidoglycans composed of polysaccharide chains that are interconnected with unusual peptides. It works as a protective layer and shapes the bacteria. The forms of bacteria are varied; they can be spherical, cylindrical, spiral or comma-shaped.

Some bacteria have a capsule outside the cell wall. The capsule allows bacteria to adhere to surfaces, protect against dehydration and phagocytic cell attack.

The plasmids are small DNA fragments are separated from the host DNA (chromosomal DNA) and can be transmitted between bacteria.

The bacteria are divided into two large groups according to their reaction to a staining technique: Gram-positive and Gram-negative. This staining was invented by

The Bacteria domain (formerly called Eubacteria) represents the first branch of the tree of life division. This group presents a great variety of row of which we can mention: the difference between Arches and bacteria

Difference between Arches and bacteria

The main differences between archaea and bacteria are in the composition of the membrane and cell wall, metabolism, and genetic machinery.

The cell membrane of archaea differs from bacteria in the type of phospholipids that make it up. The membrane phospholipids of the bacteria are formed by two linear chains of fatty acids, linked by ester bonds to glycerol with a phosphate group in the third carbon. Two layers of these phospholipids form the membrane. That is why it is called lipid bilayer and is similar to the membrane structure of eukaryotes.differences between archaea and bacteria

On the other hand, the phospholipids in the archaea membrane are made up of long chains (from 20 to 25 carbons) and branched isoprenoids, which are joined at each end by ether bonds to glycerol, which in this case has a phosphate group in the first carbon. This type of phospholipid forms a lipid monolayer. differences between archaea and bacteria

A characteristic that distinguishes certain species of archaea from bacteria is their ability to generate methane from carbon dioxide and other organic compounds such as acetate and format. Although archaea can generate their energy source from light, they do not perform the process of photosynthesis, as cyanobacteria do.