Difference Between Purine And Pyrimidine: Each and every cell of any living being contains the genetic code inscribed in the DNA and RNA sequences. These molecules are composed among other elements by nitrogen bases and these, in turn, can be classified between purines and pyrimidines. Here we will try to make some light on this topic so you can understand what the differences between purines and pyrimidines are. 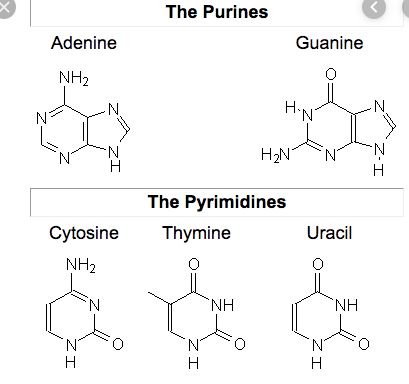 Both some and other nitrogen bases are composed of rings with carbon and hydrogen atoms.

We could say that the main difference between them is that purines have 2 of these rings while pyrimidines only have one.

The acids that are considered purines are guanine and adenine, and since they always have to be paired with each other, these two purines give rise to adenosine.

Acids that are pyrimidines are thiamine, cytosine, and uracil.

The detailed study of purines, pyrimidines, and DNA, in general, opens a huge field of study for researchers, biologists and doctors to advance the development of new drugs and gene therapies that are capable of offering fully customized medical or pharmacological solutions.

Thanks to the study of this type of technology it has been possible to see how a certain treatment against some types of cancers was effective in some people while they will have no effect on others and this is determined by genetic information.

Huge advances are expected in the coming years that may be able to stop or cure diseases such as cancer or other neurodegenerative pathologies for which no effective treatment is currently known.

These acid chains are what shape all the genetic information that makes us unique.

In recent years, great progress has been made both in genetic editing technologies that are becoming cheaper exponentially and in determining the influence that each gene has on the development of diseases and on the physical and psychological qualities and conditions of people.

Deoxyribonucleic acid (DNA) and ribonucleic acid (RNA) are present in cells of all life forms on Earth. Both DNA and RNA are composed of sugars, phosphate molecules, and nitrogen bases. There are 5 types of nitrogenous bases: adenine, thymine, guanine, cytosine, and uracil. They are classified as purines or pyrimidines, according to their chemical structure. Difference Between Purine And Pyrimidine.

There are 3 types of pyrimidines: thiamine, cytosine, and uracil. Pyrimidines are composed of a single carbon-nitrogen ring, so they are smaller than purines. Cytosine is found in both DNA and RNA, while thiamine is found only in DNA and uracil, in turn, only in RNA. Difference Between Purine And Pyrimidine

Each 3-base chain, called a triplet cord, codes for an amino acid. This means that enzymes “read” the cords and form portions of proteins according to their individual codes. The codons, on the other hand, are arranged in genes, which constitute a strand of DNA, which are wrapped in chromosomes, which are located in the nucleus of eukaryotic cells. Difference Between Purine And Pyrimidine