Difference Between Gen and allele is that A gene is a fragment of DNA that stores genetic information for the synthesis of a protein or its regulation. An allele is each different version of a gene for the same protein. For example, the ABO gene encodes the ABO human blood group protein that has at least three alleles: A, B, and O. 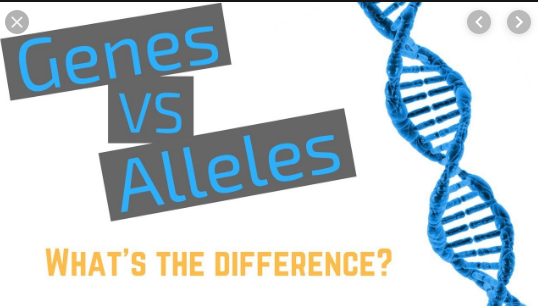 Genes determine the physical and biochemical characteristics that an individual will have. They manifest through visible physical features (phenotype), such as the color of the skin or eyes, in addition to the functioning of the organism.

An allele is a specific variation in the DNA sequence of a gene that determines how genetic characteristics will be expressed in the individual. For example, the androgen receptor gene has several alleles, one of which is associated with hair loss in men (baldness or androgenic alopecia).

Difference Between Gen and allele in Tabular Form

What is a gene?

The gene is the functional unit of inheritance. It consists of a DNA fragment (deoxyribonucleic acid) that contains the genetic information for the synthesis of a protein. Proteins are macromolecules that perform the main functions of a cell.

The word “gene” comes from the Greek root genos, meaning ‘race’ or ‘origin’. Gregor Mendel (1822-1884) was the first to describe genes as “inheritance packages.”

The set of genes of an individual is known as a genome and determines the genotype or DNA sequence of the genome. The phenotype is represented by the visible and measurable characteristics and features of the living being.

The position on the chromosome of a gene is called a locus. For example, the insulin gene (INS) is found on chromosome 11 of humans at locus 11p15.5, while the gene for melanocortin receptor 1 (MC1R), responsible for skin pigmentation, is found in locus 16q24.3.

Characteristics of the genes

How a gene works

In order for the gene information to be expressed as a protein, there are sequences in the DNA called promoters, which are the site of transcription initiation. The enzyme responsible for “gene reading” is RNA polymerase, which forms messenger RNA from the genetic sequence. Messenger RNA is then translated into proteins in the ribosomes.

Basically, the genes that transmit the specific biological characteristics of each living being, from one generation to another, are stored in the genes.

What is an allele?

An allele is any of the variations in the DNA sequence that a gene can adopt. Each gene can have two or more alleles, the difference of which can range from a single nucleotide to the addition or removal of a piece of its sequence.

Characteristics of an allele

Origin of the alleles

The alleles originate by substitution, insertion or elimination of nucleotides in the DNA sequence of the gene. For example, the Na 1.7 protein (which is a sodium channel) is encoded by the SCN9A gene that can have different alleles:Difference Between Gen and allele

Alleles contain information about specific traits that each gene possesses. These features may manifest (it is possible to see them) or they may be hidden (even if they are present). For example, in rabbits the color of the coat is determined by the C gene that has four alleles:

When one of the alleles is expressed in the phenotype (it manifests itself), it is called dominant, while the allele that is not expressed in an individual is called recessive. For example, any rabbit with the dominant allele c + will be brown ( c + c, c + c ch or c + c h ). The recessive allele c will only be evident in homozygous rabbits cc.