Difference Between Euchromatin And Heterochromatin is that An equatorial cell, like the cells of the human organism, is characterized by having membranous compartments in its cytoplasm, the so-called organelles, highlighting the cell nucleus where the DNA (deoxyribonucleic acid) that constitutes the genetic material of the cell. 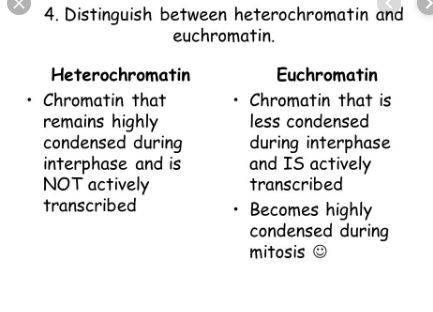 DNA molecules are not found in the nucleus by themselves but are found in the form of chromatin, a substance formed by molecular macro completes of DNA, proteins and sometimes RNA.

The function of chromatin is primarily to package DNA with different structures depending on the phase of the cell cycle. Chromatin makes it possible for all DNA to fit in the nucleus, protects DNA from potential damage, modulates genetic expression and strengthens DNA molecules during cell division when they are subjected to tensile forces.

The heterochromatin and euchromatin are the two forms or compaction levels having chromatin during interphase, between the end of a division and the start of the next. The set of the two is known as interphase chromatin. During this phase the cell grows, develops and exerts its physiological function; When you are ready to enter division, you will begin to duplicate your DNA to enter the division phase again.

During the interface, the genetic expression and synthesis of cellular components are usually maximum. Chromatin adopts a lax conformation that allows access to RNA polymerases for genetic transcription and repair factors if necessary. This slightly compact conformation is known as euchromatin.

But interphase chromatin compaction is not uniform. In areas where there are genes that the cell does not need, chromatin adopts a more compacted conformation, heterochromatin, which does not allow genetic expression.

Although the structure of chromatin is subject to intense research, it is not yet understood in sufficient detail to understand how it performs most of its functions and the specific factors involved in the adoption of one or another conformation.

The basic structural element of chromatin in all eukaryotic cells is the nucleosome. Each nucleosome is made up of a histone octamer, usually called the nucleus and a DNA helix that envelops it. The histone octamer consists of two pairs of four types of histones: H2A, H2B, H3, and H4. The DNA chain goes about 1.7 times around it.

At the exit/entry of the DNA in the nucleosome, a histone of the H1 type called the histone is located. The nucleosome and histone H1 complex is known as chromatosome. Between each chromatosome, there is a strand of DNA called link DNA, spacer DNA or DNA linker. Linker DNA chains and intercalated chromosomes adopt a conformation often referred to as a ” pearl necklace ” because of its characteristic shape. Difference Between Euchromatin And Heterochromatin