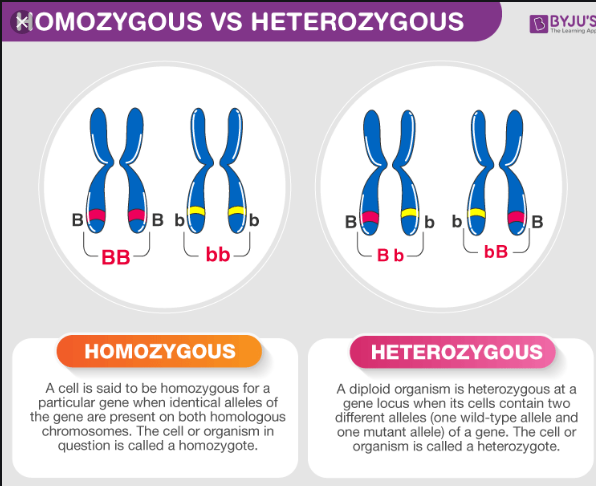 The genes are DNA fragments that determine a specific character of the living being. A gene for a character can have several versions, which is known as alleles. For example, the gene for the color of rabbit fur (gene C) has four different alleles: brown allele, albino allele, chinchilla allele, and the Himalayan allele. However, a rabbit may only have two alleles.

Difference Between Homozygous and heterozygous in Tabular Form

When two equal alleles are combined that express the dominant phenotype, we are in front of a dominant homozygote. For example, the brown color of the eyes in humans is a dominant character, if the person has both alleles for brown, it will be homozygous dominant.

There are certain combinations of alleles that can only be expressed when they are homozygous. This is found in recessive alleles, versions of genes that are not expressed when there is another dominant gene. For example, in the ABO blood group in humans, the O allele is recessive. This means that people with blood type O are homozygous, they have two alleles O (OxO).

In the case of humans, the type of ABO blood group in red blood cells is also a good example to explain when a character is homozygous or heterozygous. The gene for the blood group has three alleles: A, B and O. A person can inherit the following allele combinations from his parents:

The combination of alleles would be the genotype and the blood group is the phenotype. Whenever we see that the alleles are equal (AxA, BxB, OxO) they are homozygous, and when they are different (AxO, BxO, AxB) they are heterozygous.