The difference between HIV and AIDS is that AIDS is the disease caused by HIV infection. You may be infected with HIV but not develop AIDS. 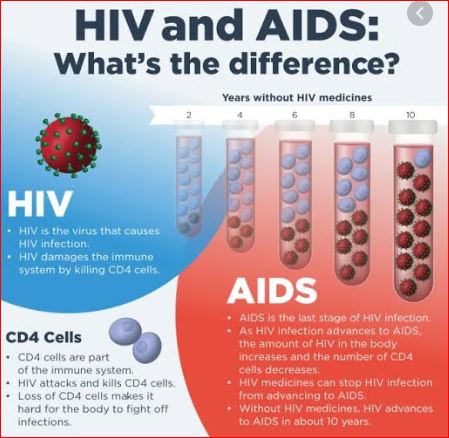 There are two types of HIV virus: HIV-1 and HIV-2. Both belong to the group of retroviruses , which are viruses with RNA, and lentiviruses , viruses with very long incubation periods. HIV-1 is found in Europe and America, while HIV-2 is found in West Africa.

Like all viruses, HIV needs a host cell to reproduce. In this case, HIV attacks white blood cells, specifically CD4 + T cells . Lymphocytes are part of the immune system responsible for protecting the body against invading agents.

How does HIV destroy immune cells?

When the virus enters an organism, a period of reproduction begins within the immune cells, during which the symptoms of the disease do not manifest. During this time, the infected person is considered HIV positive , that is, the HIV test is positive, but the person does not show symptoms.

The transmission of HIV is done through the exchange of body fluids of infected people, such as blood, milk, semen and vaginal secretions. There is no risk of infection by simple skin contact, such as kissing or shaking hands, or by sharing personal items, water or food.

Health workers or individuals who share syringes are at risk of being infected by the prick of a needle contaminated with HIV.

So far there is no cure for HIV. Prevention is the most effective measure against HIV infection and the impact of AIDS. For this it is recommended:

There are tests that detect the presence of HIV in the blood. Sex workers or promiscuous people are recommended to test once a year. It is important that when there is suspicion of infection, an HIV test is performed as soon as possible.

People infected with HIV can control their viral load by means of antiretrovirals. Antiretroviral therapy (ART) is a mixture of drugs that reduced virus replication in the body. It also reduces the risk of HIV transmission.

AIDS is the most advanced stage of HIV infection, characterized by the development of cancer of different types, opportunistic infections, and other clinical manifestations. AIDS stands for acquired immune deficiency syndrome. In English, it is known as AIDS.

AIDS was first detected in 1981 when a large number of homosexual men began to suffer opportunistic infections and rare cancers. AIDS can take between 2 and 15 years to develop since the individual was infected.

Opportunistic infections are infections that occur in people with weakened immune systems. As HIV attacks the immune system, the symptoms of AIDS are related to diseases resulting from the attack of other infectious agents:

Without treatment, patients with AIDS can develop tuberculosis, candidiasis, meningitis, pneumonia, and cancers, such as lymphoma and Kaposi’s sarcoma.

December 1 was instituted as World AIDS Day by the UN. It is a worldwide opportunity to fight HIV infection and show support for people living with the virus.