Life is a difficult concept to define in scientific terms; However, we can distinguish between living and non-living beings. The Earth is a cluster of matter and energy that, at some point in its evolution, gave rise to what we know as life. 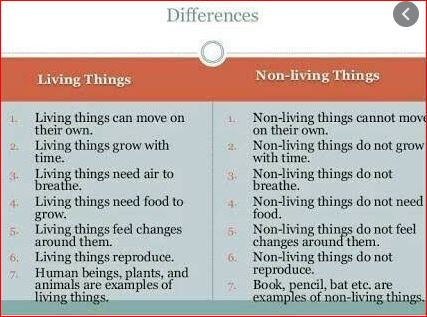 In this sense, we are surrounded by living and non-living beings that we can identify with the naked eye in our environment. Below we explain what they are.

What are living beings?

A living being is all that creature or organism composed of cells, whose most outstanding characteristics are that they are born from another similar being, grow and / or develop, can reproduce and then die. The science in charge of the study of life is biology.

Living things include a great diversity of organisms, among which we can recognize certain common characteristics.

Living things are chemically complex creatures, although they are mainly made up of atoms of four elements: carbon, oxygen, hydrogen, and nitrogen.

When combined they give rise to organic molecules or macromolecules such as proteins, carbohydrates, and nucleic acids. These, in turn, organize and originate cells, the basic unit of living matter.

Living organisms grow, that is, they increase in size, either because of the size of the cells or the number of them increases. In addition, they develop special structures in higher organisms such as organs, tissues, and systems, with specific functions.

For example, fungi or mushrooms have a mycelium that grows in the soil and develops forming the hat and the foot or stem, which is how we recognize these organisms in forests or meadows.

Living beings also have the ability to regenerate and / or repair when they suffer a reversible injury or damage. For example, when we cut ourselves, the tissues around the wound grow and produce material to form the scars.

This means that when a living being comes into contact with physical or chemical agents it can react. The answer can be short or long term. For example, plants grow upwards by the stimulation of sunlight, an effect known as positive phototropism.

Living things reproduce, that is, they multiply. There are two types of reproduction: sexual and asexual.

Metabolism is the set of chemical reactions and energy transformations that occur in cells. There are two main ways:

Homeostasis refers to the regulation and maintenance of the internal conditions of an organism. For example, in humans, there are mechanisms that regulate blood pressure and body temperature.

Living organisms have undergone transformations and adaptations to environmental changes over time.

For example, antibiotics are drugs that are used to fight bacterial infections, by preventing the growth of bacteria.

Recently, some species of bacteria have been found to be resistant to antibiotics, which is of concern for the treatment of infections.

What are non-living beings?

Everything that does not meet the requirements of “life” is considered as a non-living, inanimate or inert being.

Natural non-living objects are those created by the physical and chemical forces of nature, such as rocks, clouds, oceans, mountains, among others.

The artificial nonliving objects are those creations of human beings, such as mobile, bridges, roads, dishes and clothes.

Non-living beings do not have a distinctive chemical structure between them and, in general, are much simpler. For example, water is composed of two atoms of hydrogen and one of oxygen, while cooking salt is composed of sodium and chlorine atoms. Rocks are mixtures of minerals and inorganic elements.

Inanimate beings do not change their shape or size by themselves. For example, a ceramic cup will have the same shape and size forever, as long as an external agent does not alter its structure, that is, it falls and breaks.

Artificial objects, on the other hand, can be designed in alternative ways, but that is part of human activities. For example, the Ford T-vehicle model did not adapt itself to currently be a Tesla S-model car.

They do not show a reaction to external stimuli

In this sense, non-living objects do not show defensive or favorable behavior in the face of negative or positive stimuli. For example, if you hit a vehicle, it is not removed in pain or attacked enraged.

They do not require energy to survive

Although we know that a vehicle needs fuel for its operation, the vehicle can exist even without fuel.

Non-living objects do not reproduce, a non-living entity does not regenerate or generate another identical entity. For example, a third party will not appear on a shelf with two plates, unless a person places the third plate.