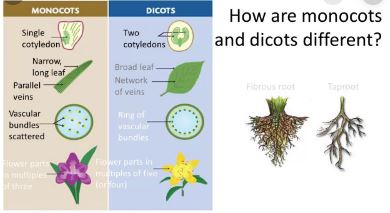 Within the kingdom of plants, those plants with seeds are divided into gymnosperm and angiosperms. Angiosperms are the group of plants that have flowers, within which we get monocotyledons and dicotyledons or eudicotyledons.

What is a monocot?

A monocot is a kind of plant that produces flowers (class Liliopsida) whose seeds have a cotyledon. They are predominantly herbaceous.

The seeds of monocots have a well-developed endosperm. Starch and proteins necessary for the initial growth of the plant are stored in the seed. Germination is hypogeal, that is, the cotyledon remains underground.

The monocot leaves are simple with isobilateral symmetry. They have parallel veins, soft edges and a long sheath, which covers the stem. Stomata are distributed equally on leaf surfaces.

The main root is not developed and the root system is adventitious.

The stem can be hollow or full. Vascular bundles are scattered along the stem. The stems and roots have no cambium and their diameter does not vary.

The flowers have a simple chalice with multiple numbers of petals of three.

This class contains 25% of flowering plants and is divided into the following subclasses:

Dicotyledon (Magnoliopsida class) is a class of flowering plants whose seeds have two lateral cotyledons.

Starch, proteins, and fats are stored in the seed, which is used for the initial growth of the plant. The germination of dicotyledons is hypogeal or epigeal, that is, cotyledons may be below or above the earth, respectively. difference between monocot and dicot

The leaves are simple or complex, with dorsoventral symmetry. They have reticulated veins and often with uneven, serrated or sectioned edges. The stomata are on the underside of the leaves.