Living things are made up of cells, the basic unit of life. There are many types of cells: 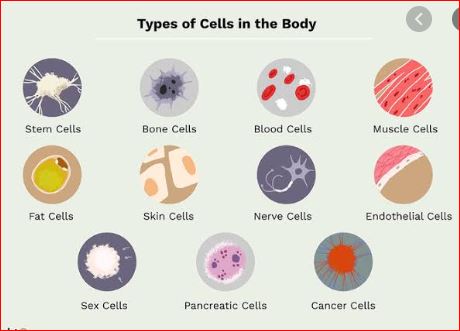 Cell types according to their evolutionary origin

Depending on the evolutionary origin, we have two types of cells: prokaryotic and eukaryotic cells.

The prokaryotic cell is the cell that distinguishes the Bacteria and Archaea domains. Most prokaryotic cells are small and simple in appearance and are widely distributed throughout the biosphere.

The Staphylococcus aureus is a Gram-positive bacterium so redondeada`que can be found in the skin and mucous membranes of humans. Infections by this agent have increased due to antibiotic-resistant strains.

The eukaryotic cell is characterized by presenting its cellular content organized in membrane compartments, in particular, the genetic material (DNA) that is confined to the nucleus. In this way, the eukaryotic cell has three main structures:

The Giardia lamblia is a single-celled protozoan, which is characterized by pear-shaped and four flagella that allow you to move. This parasite produces an intestinal infection characterized by abdominal pain and diarrhea.

The plant cell is characterized by having a plasma membrane, cell nucleus, and cytoplasm, where the organelles are found. It also has:

Plant leaf cells, such as Elodea canadensis , are specialized to capture sunlight and absorb carbon dioxide from the air, for carbohydrate synthesis. All plants are autotrophic beings, that is, they are independent of other organisms to obtain their energy.

The animal cell is characterized by having a plasma membrane, cytoplasm, and nucleus, like the other eukaryotic cells. They are distinguished from plant cells in:

Within the diversity of animals that populate the Earth, one of the easiest cells to distinguish with the naked eye is eggs. Some have rigid protection coverage, such as bird eggs. Others are naked, as is the case with amphibian and fish eggs.

Within the human body, there is a great diversity of cells with specific functions.

Epithelial cells are found covering the outside of the body (in the skin) and internal surfaces (such as inside the mouth and nose). They can be flat, cubic or cylindrical, depending on the tissue they are part of. They are strongly linked to each other, without intercellular spaces. Its main function is to act as a protective barrier.

The fibroblast is the cell responsible for the formation and maintenance of connective tissue. They are also activated in the healing and wound repair processes. They are large, flattened and tapered, with an oval and flattened nucleus.

Adipocytes are lipid storage cells and are found in connective tissue and adipose tissue. They are very large and round, with a thin line of cytoplasm around a large fat vacuole.

Muscle cells are characterized mainly by their ability to contract. They are elongated in the direction of the movement they perform. They are found in skeletal muscle, heart muscle, and smooth muscle.

Monocytes are cells of the immune system that develop in the bone marrow and are released into the blood. After a short period of time, the monocytes leave the blood vessels and penetrate the tissues, transforming into macrophages.

Red blood cells, red blood cells or erythrocytes are characterized by being donut-shaped and being anucleated, because in the process of formation in the bone marrow, in the last stage of maturation, they lose the nucleus. Its main function is the exchange of gases:

In the bones there are several types of cells: