The Endocrine System is a set of organs that generate and secrete hormones (substances that act as chemical messengers), these reach different parts of the human body to regulate, control and coordinate the functions of various organs. 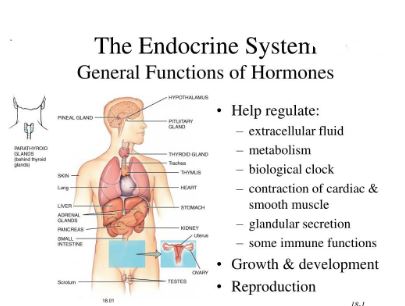 Functions of the Human Endocrine System

The function of the Endocrine System is the internal communication of the human organism, unlike the Nervous System (the other internal communication system) that communicates thanks to the nerve impulses in the nerves that function as a series of cables distributed by the body, the Endocrine communicates by sending hormones through the bloodstream and can reach areas of the human body that the Nervous System does not reach .

Let’s look at these schematized differences:

Organs of the Human Endocrine System

There are exocrine glands (external secretion) belonging to the Exocrine System, which create enzymes and use ducts to transport the secretion to the body or organ surface, and the endocrine glands that secrete hormones and use the bloodstream to reach the fluid interstitial cells.

The glands of the endocrine system can also be classified according to the place of action and the specific receptors prepared to capture them:

Glands of the Endocrine System

To understand how the endocrine glands work we will see what they are, what type of hormones each one secretes and in which organs of the human body they act.

Its size is 5 to 8mm, like a grain of rice, this gland is stimulated by darkness and inhibited by luminosity through the photosensitive cells of the retina, hence adapting the biological rhythm of the body at 24 hours day.

Gland controlled by the Hypothalamus, so that 2 systems overlap: the Nervous System and the Endocrine System.

The hormones that arrive from the hypothalamus to the pituitary gland are paracrine (regional) and we will name them as they stimulate the secretion of other hormones in the anterior or posterior pituitary gland.

We will start with the adenohypophysis :

GnRH stimulates the secretion of LH and FSH.

HRT stimulates the secretion of TSH and PRL.

GHRH stimulates the secretion of GH.

On the other hand, we have hormones that are created in the hypothalamus and stored in the neurohypophysis and are endocrine because they act at a distance:

The thyroids are in the trachea and secrete the hormones T4 (thyroxine) and T3 (triiodothyronine) that regulate metabolism, and the calcitonin that regulates calcium in bones and cells.

The thymus generates the thymosin hormone that is involved in the development of T cells that are immunological.

They are above the kidneys and are divided into:

It has exocrine and endocrine function, the latter is responsible for the metabolism of blood glucose. When the pancreas secretes insulin decreases the passage of glucose to the cells and when it secretes glucagon increases it.

The gonads are divided according to whether they are female or male and secrete the following hormones:

An alternative classification of the Endocrine Glands

Once the endocrine glands are known, we can see an alternative classification based on their chemical structure: Functions Endocrine System