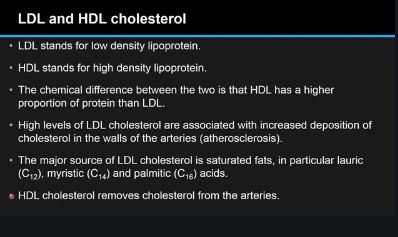 This classification of lipoproteins is due to the technique used for their separation: ultracentrifugation. In this technique, the blood plasma in a tube is centrifuged at high speed and the lipoproteins are separated by their density, leaving the densest (HDL) at the bottom of the tube and the least dense (LDL and other lipoproteins) floating at different levels of the tube.

Cholesterol is a lipid molecule that is not soluble in water. Lipoproteins are spherical particles composed of proteins and lipids that carry cholesterol and other lipids through the blood. The main lipoproteins in cholesterol transport are HDL and LDL.

What is HDL cholesterol?

HDL or HDL cholesterol (HDL-C) are lipoproteins that transport cholesterol from cell membranes to the liver. They are also known as good cholesterol, although this statement is wrong because HDL not only contains cholesterol.

HDLs originate from Apo A1 protein that is synthesized in the extracellular space. This protein circulates through the tissues capturing cholesterol and phospholipids from the membranes, and once it enters the circulation, it exchanges proteins and cholesterol esters with other lipoproteins.

HDL, like the other lipoproteins, are spherical particles, consisting of:

HDL proteins can be recognition proteins such as Apo A1 and Apo A2 and enzymes such as LCAT.

The main function of all lipoproteins is to solubilize fats in the blood. HDLs are the lipoproteins responsible for transporting cholesterol from extrahepatic tissues to the liver. It is what is known as the reverse transport of cholesterol.

In the liver, cholesterol is transformed into bile acids for elimination by the intestine or recycled.

High levels of HDL cholesterol are associated with protection against cardiovascular disease (CVD). Normal HDL values ​​for an adult should be between 40 and 60 mg / dL (1.04-1.55 mmol / L in SI units). Values ​​greater than 60 mg/dl are recommended to prevent CVD. HDL values ​​below 40 mg / dL are at high risk for CVD.

What is LDL cholesterol?

LDL or LDL cholesterol (LDL-C) are lipoproteins that carry cholesterol from the liver to extrahepatic tissues. They are also known as bad cholesterol, since high levels of this lipoprotein are deposited in the arteries, producing atherosclerotic plaque.

LDLs are derived from VLDLs (very low-density lipoproteins of larger size and rich in triglycerides) that are formed in the liver. These VLDL travel through the bloodstream, delivering triglycerides to the tissues, In this way, they are reduced in size and gaining in cholesterol content, until they become LDL.

LDLs are also spheroidal particles, larger than HDLs. They present:

The main protein of LDL is apo B100, which is a recognition protein by cellular receptors.

LDL is responsible for carrying cholesterol to the tissues that need them. VLDLs loaded with triglycerides and cholesterol are assembled from the liver. Triglycerides are released as they go through the circulation. LDLs are the result of the reduction in the size of these VLDLs.

The apo B100 protein of LDL binds to cell receptors and enters endocytosis into the cell. The cell can thus use cholesterol to form membranes and other compounds.

People with high levels of LDL should consult with their doctor to implement measures that lead to reduced cardiovascular risk.

Cholesterol is an important molecule for the functioning of cells and animal organisms. This compound is the precursor of steroid hormones, such as sex hormones and corticosteroids. In addition, it is part of the cell membranes, sandwiched between the phospholipids of the lipid bilayer, regulating the fluidity of the membranes.

To say that there is a good or bad cholesterol is an oversimplification of the role of transporter lipoproteins. The cholesterol that accumulates in the arteries promotes the formation of fatty plaques or atheromas, leading to atherosclerosis.