The limbic system is that part of our brain responsible for regulating the physiological and emotional responses of our bodies. The anatomical structures of the limbic system are responsible for processing our emotions and regulating our behavior. This part of the brain has always aroused a lot of curiosity in the scientific community and in the world of psychology, that is because it is incredible to investigate how such a specific part of our anatomy can regulate something as important as our emotions can be. 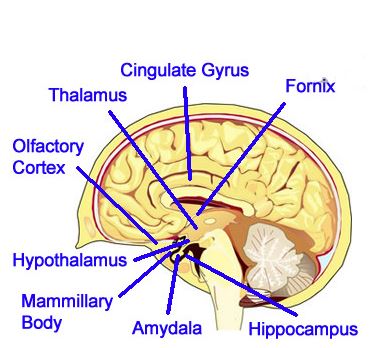 Here, we will try to enumerate the functions of this system and describe its anatomy with images that accurately illustrate the information provided. If you are interested in the limbic system, its parts, functions and diseases, we invite you to continue reading the following article.

What is the limbic system?

This set of brain areas has not always been defined as we understand it today, throughout historical evolution and advances in neurosciences, the term ” limbic system ” has evolved to the definition we have today.

Evolution of the term

Two centuries ago, a scientist named Paul Broca first referred to the limbic system to refer to the area adjacent to the pineal gland. Broca spoke of a ” large limbic lobe ” and in that term encompassed the entire medial face of the cerebral hemispheres around the corpus callosum. He also introduced olfactory bulbs into this large lobe (although these have little to do with emotion processing).

Subsequently, James Papez discovered a circuit formed by nervous structures that are also part of the limbic system. This neurologist is known for being the first to propose an anatomical model for emotions and for putting everything related to the sentimental plane under the scientific focus.

We had to wait until 1952 for Paul MacLean to coin the term “limbic system” we use today. This scientist defined the neuronal structures involved in that system and proposed several theories about the brain and its evolution. In them, he claimed that the emotional system was the most advanced of them all (he defined it within the gemmiferous brain) and that it was something of very advanced mammals.

The current definition of the limbic system

Today, we talk about the limbic system when we refer to the set of structures located in the brain (internal area of ​​the brain) and whose main utility is the management and regulation of emotions. What we usually define as unconscious or irrational is based on a very specific area of ​​human anatomy. This system is formed by structures such as the hypothalamus, the hippocampus, the amygdala … among others, which we will describe later.

The limbic system or emotional nervous system is located in the inner zone of our brain, beyond the cerebral cortex. It receives influences from many other ways of the nervous system related to the senses: auditory, visual, olfactive system, touch and taste sensors. Being interconnected with so many other routes, it is very complicated to make a completely precise scheme of all its anatomical elements. Among the main parts of the system we highlight the following:

This element is related to the transformation of recent memory to long-term memory and autobiographical memory. We find it in the central part of the temporal lobe (1) and it also has an important function related to orientation and spatial memory.

The tonsil or tonsil body is a mass of almond-shaped neurons located in the temporal lobes (2). This area of ​​the limbic system is related to the formation and storage of memory associated with events or events that have produced strong emotions. It is said that the amygdala is the seat of all emotions. In addition, recent studies also show that this element has a strong implication in memory consolidation.

The thalamus is defined as the brain structure located above the hypothalamus (3). All sensory stimuli (except smell) pass-through this area of ​​our limbic system and then be referred to more specific areas. This part of our brain has the main function of behaving as a nucleus of connection and association of emotional stimuli and information.

This small element of our emotional nervous system (4) has is responsible for many neuronal functions. The hypothalamus is the most important area of ​​the brain for the management and coordination of the balance of our body. This balance is known as homeostasis and is the process by which we regulate ourselves and we can remain stable in our environment. Recently it has been discovered that it perceives the levels of a protein called leptin when we eat too much and, in response to those levels, decreases our appetite. It also regulates behaviors such as sleep cycles and maintaining body temperature.

The basal ganglia participate indirectly in the emotional nervous system, these are responsible for managing our motor responses (gestures or expressions) related to the emotional states produced by the other parts of the limbic system.

Parts of the limbic system

Next, we offer you a scheme so that you know better all the parts of this brain zone

As we have been repeating throughout this article, the limbic system is responsible for the regulation and motor expression of emotions. Next, we highlight the following functions of the limbic system:

The limbic system is the emotional brain?

When we talk about emotional experiences, a sense of irrationality usually comes to mind, as if they were not part of our thinking mind. However, as we have shown, the brain is the main cause of our emotional responses. So we can say that our emotions are processed by the central nervous system.

Relationship between the limbic system and emotions

As we have commented throughout this article, the limbic system has a large number of neuronal structures responsible for regulating emotions through neurotransmitters.

The limbic system regulates our body’s responses to emotional stimuli. For example, it activates alert systems and increases the heart rate when we are nervous or afraid. However, reducing its field of action to emotional responses is an approach that neglects many of the other functions that this system has and that we have mentioned before.

Thanks to the studies of James Papez or more recently McLean with his theory of the triune brain, emotional nuclei have been located in this brain system. In fact, the latter neurologist, used the term limbic or emotional brain to one of the three structures listed in his theory.

While it is true that today these theories are somewhat outdated and it has been shown that, in reality, emotions are regulated by the entire nervous system, there is no doubt that there is an important relationship between the limbic system and emotions

Once we have presented the limbic system, its parts, and functions, it is time to list some of the main diseases.

Being such an important part of our nervous system, there are numerous disorders associated with the limbic system, among the most common we highlight the following: