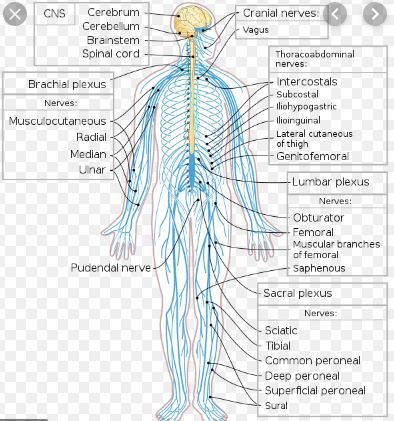 The brain is the organ that is responsible for carrying out the superior functions of our body, such as memory and other cognitive functions. The spinal cord and nerves derived from the brain are responsible for controlling movements.

Some of the main diseases of the central nervous system are the following:

Next, we will define these pathologies so that you can clear all your doubts about their symptoms and treatment.

Epilepsy is a disorder of the brain that is characterized because the person who suffers from it has a lasting predisposition to generate epileptic seizures because their neurons do not work properly. This disease of the central nervous system is chronic and the person who suffers it manifests epileptic seizures unexpectedly and spontaneously, so it is not only a physical problem, but the consequences can also be cognitive, psychological and social.

It is important to take into account that in order for us to talk about epilepsy, the person must have had at least two crises in an interval greater than 24 hours between an epileptic seizure and another, without an apparent cause and when it is shown that after having suffered an epileptic seizure, the person has a tendency to repeat. It is very important that the person is properly examined and diagnosed since almost half of the people who suffer an epileptic attack, do not repeat it more and therefore could not speak of epilepsy.

If you want to know more about this disorder, we recommend you read the following article about types of epilepsy and their symptoms.

When there is an infection in the brain and spinal cord, this can lead to high-severity inflammation. Among the main symptoms that appear when inflammation occurs are fever, headache, confusion and even, in the worst cases, the affected person can suffer serious brain damage so that they may have seizures, which appear stroke and can even lead to death.

When we talk about meningitis, we talk about an acute inflammatory response of the meninges that occurs because of a bacterial or viral infection due to some fungal type infection, the reaction to some treatment, to some other inflammatory disease or some type of cancer, spinal or brain injuries, etc.

It is a brain inflammation, which is mainly caused by a virus, although it can also be caused by bacteria. This type of condition can be low or high severity, I feel mostly mild. When it is mild encephalitis, the symptoms presented by the affected person are similar to those of the flu and the treatment would consist only of getting enough rest, drinking plenty of fluids and ingesting the medication indicated by the doctor. However, in the worst cases, people may experience some severe symptoms such as sudden fever, severe headaches, seizures, confusion, among others.

Treatment for the most serious cases includes hospitalization of the person in order to have the disease well controlled and if it has affected some brain functions it is recommended to carry out a rehabilitation with physiotherapists and speech therapists.

4. Tourette: a curious disorder of the central nervous system

Tourette syndrome is a neurological genetic disorder that manifests in childhood or adolescence. The person suffering from this disease makes abnormal movements, tics or sounds and has very poor control over them. The first symptoms that develop during this syndrome are those of the face, trunk, and arms.

It is also possible that the person may repeat certain words and sometimes say rudeness continuously. On the other hand are facial tics, including blinks, grimaces, contractions of the nose, etc. which are carried out continuously and quickly. This syndrome can lead to other types of disorders such as obsessive-compulsive disorder, anxiety disorders, depression and attention disorders with hyperactivity. So far it is unknown what is the cause of this condition, which is more common in males than in females.

Alzheimer’s is a type of dementia that occurs progressively and that destroys memory and important cognitive functions such as intellectual and social skills. People with Alzheimer’s disease have different symptoms that are getting worse with the evolution of the disease. Among the most common are problems of concentration, confusion, difficulty solving problems and in the most serious cases, the person can suffer great personality changes, have problems communicating orally and in writing, disorientation in time and place, problems to perform their daily tasks, forget about their family and close people, between others more. Finally, in the last stages of the disease, they become totally dependent people.

This pathology progressively kills brain cells and their connections. As for the causes that produce it, it has been found that it has been a consequence of different genetic, environmental factors and due to the lifestyle that the person has led.

Multiple sclerosis is a chronic disease that occurs due to the lack of a substance called myelin, which is responsible for wrapping and protecting the nerve fibers of our central nervous system. Myelin contains proteins and fats, which are necessary for the correct conduction of electrical impulses between nerve fibers. Due to the lack of myelin, scars then occur in the affected areas of the central nervous system and those scars are called sclerosis. When myelin does not function properly or is destroyed, the electrical impulses that go to the brain are interrupted abruptly, which results in the appearance of a series of symptoms.

Among the main symptoms suffered by a person with multiple sclerosis are the following:

When the disease is at a more advanced level, other symptoms may appear such as stiff muscles, sexual problems, memory loss, concentration and it is common for people with this disease to end up developing depression due to their condition. Keep in mind that the symptoms vary from one person to another and due to the type of multiple sclerosis they present.

Other disorders of the central nervous system

In addition to the entire list of diseases of the nervous system, there are other less-known pathologies but with symptoms, that must be detected to be treated in time.

If you want to read more articles similar to Diseases of the central nervous system, we recommend that you enter our category of Neuropsychology.