Difference between Angiosperm and gymnosperm is that The angiosperms are provided flowering plants, the gymnosperms are plants that do not have flowers. Both groups belong to spermatophytes or plants with seeds. The seeds are the ovules (female cells) fertilized by the male cell contained in the pollen, which contains the plant embryo. 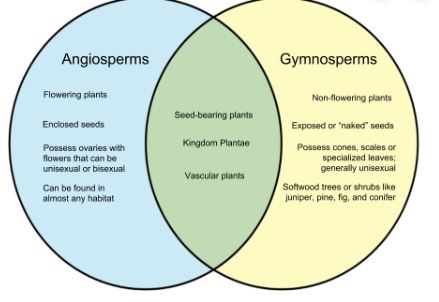 Angiosperms are seed-producing plants that have flowers. The flower is a colorful organ formed by groups of modified leaves. These modifications are shape, color, and size.

The seeds develop inside the ovary, which grows and transforms into a fruit.

The word “angiosperm” derives from the Latin Angiospermae, and this from the combination of the Greek words angeion which means “glass, case, container” and Sperma which means “seed, semen”.

The German botanist Paul Hermann (1646-1695) is credited with using the word “angiosperm” to describe flowering plants.

Reproduction takes place in the flower. The sexual organs are surrounded by the corolla, colored part of the flower, which is formed by the petals and wrapped by the calyx, group of green leaves or sepals. In the case that sepals and petals do not differ, as in tulips, they are called tepals.

The male and female organs are located very close in most cases. The male erroneous organ is formed by one or more stamens that consist of an elongated structure (filament), at the end of which is the anther, where pollen is produced.

The gynoecium, the female organ, is formed by one or several pistils, which are located within the area surrounded by the stamens. Each pistil is formed by:

Fertilization occurs when pollen reaches stigma. There are angiosperm plants that produce hermaphroditic flowers, that is, they have both sexual organs in the same flower; others instead form female flowers (only have pistils) or male (only have stamens). These plants are called monoecious. There are plants with female flowers and male flowers in different individuals, these are dioecious plants, for example, the nettle Urtica dioica.

The pollination of angiosperms is usually done by insects or through the wind. Entomophilic plants have striking flowers and special shapes to attract insects. For example, orchids are flowers of various colors and shapes that pollinate through insects.

In anemophilous plants, pollen is dragged by the wind and deposited in the stigmas of other flowers. This is the case with corn and wheat plants.

Once in the stigmata, the pollen forms a pollen tube that crosses the stigma and reaches the ovary. Through the pollen tube, two spermatic nuclei reach the ovule, one of the nuclei fuses with the vocal nucleus. From the fertilized ovocell the embryo is formed, the first phase of the development of the new individual.

The second spermatic nucleus joins a second female nucleus, forming the endosperm, a reserve tissue that will be consumed by the embryo during its development. From this moment, the embryo and the endosperm will begin to grow. The corolla withers and falls, part of the ovule forms the lining of the seed and the ovary increases in size forming the fruit, inside which the seeds are found.

Angiosperms are the most widely distributed plants on Earth. They are included in a single edge, the Anthophytas, which means they originated from a common ancestor. Modern angiosperms are classified as monocot or dicot, according to the structure of the leaves and embryos. Difference between Angiosperm and gymnosperm

Basal angiosperms are a group of plants that exhibit characteristics of mono and dicotyledons. Within this group are the magnolias, the laurel, the cinnamon tree, the water lilies or nymphs, the avocado or avocado, and the peppers.

This group includes herbs, onions, palm trees, orchids, and grasses. They are characterized by leaves with parallel veins, adventitious roots, and flowers in arrangements of three or multiples of three petals.

Dicotyledons make up two-thirds of the angiosperms on the planet. They are characterized by the presence of two cotyledons in the embryo, leaves with network-shaped veins and the main root. Within this group, we get tomato plants, potatoes, beans, and mango, apple and peach trees, among others.

The appearance of angiosperms is located in the Mesozoic era, in the Cretaceous period, about 125 million years ago. Genomic and Paleobotanical evidence suggests that angiosperms did not evolve from gymnosperms but in parallel.

Gymnosperms are seed-producing plants that do not have flowers. In gymnosperms, flowers are replaced by cones, which lack ovaries. The eggs are naked, as are the seeds that form from them (they are not found inside a fruit).

Etymologically the word gymnosperm derives from the Greek gymnosperms, which means naked seed, by gymnos “naked” and Sperma “seed, semen”.

This group of plants does not resort to insects for pollination but uses exclusively wind (anemophilous). Difference between Angiosperm and gymnosperm

Gymnosperms are sporophytes, plants with two copies of their genetic material capable of producing spores. They are also heterosporous, that is, they have male and female gametophytes that develop from spores produced by separate cones.

The wind releases the pollen grains that are deposited in the female cones. In gymnosperm plants, fertilization takes a long time due to the slowness with which pollen forms the tube through which it reaches the female gamete. Difference between Angiosperm and gymnosperm

Gymnosperms inhabit many ecosystems, especially in temperate and cold regions since they adapted to this type of climate. They are classified into four main edges: Coniferophyta, Cycadophyta, Gingkophyta, and Gnetophyta.

Conifers are the dominant group of gymnosperms. This includes pines, firs, and junipers. In this type of plant, the sexual organs are protected by small scales, gathered in sets of different forms (pine cones or cones).

Female cones are larger and form on short branches. Male cones are formed every spring in groups located at the ends of the longest branches, and that is where the pollen comes from.

Of the Ginkgoales, currently, there is only Gingko Biloba. Unlike other gymnosperms, this tree produces male and female organs in different plants.

Cycads develop in tropical and subtropical climates; They are often confused with palm trees for the shapes of their leaves. However, they have large cones that can be pollinated by insects. Difference between Angiosperm and gymnosperm

Fossil records show that the first gymnosperms originated from ferns, probably in the Devonian period (Paleozoic era) about 390 million years ago. The possibility of producing seeds allowed them to adapt to dry conditions.

The Ginkgoales were the first gymnosperms to appear in the Jurassic period. In this period, the cicadas, palm-like trees also proliferated.