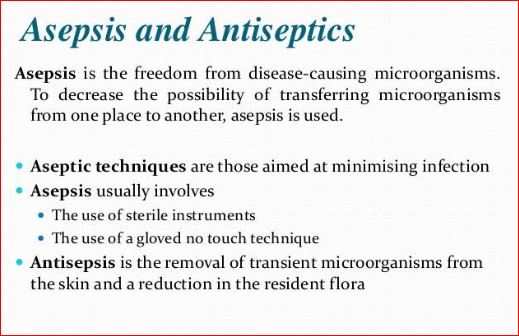 Both asepsis and antisepsis are different approaches applied in places where the presence of pathogenic microorganisms should be avoided, such as clinical laboratories, hospitals, and the food industry, as they can cause infections and endanger the health of human beings.

Antisepsis is the removal and/or decrease of microorganisms in the skin or mucous membranes of living beings. Microorganisms, such as bacteria and fungi, normally inhabit the skin and mucous surfaces (such as inside the mouth). When a surgical procedure is performed, for example, the extraction of a tooth, or we have a wound, these microorganisms can cause infections.

The term “antisepsis” derives from the Greek sepsis which means “rot” and the anti prefix meaning “against.” Antisepsis would come to mean something “against rot.”

For example, in a surgical intervention, doctors, and nurse (s):

When we cut ourselves, we are doing antisepsis when we wash the wound and put alcohol or povidone, all this with the intention that the wound does not become infected.

Antiseptics and their mechanism of action

Antisepsis is applied in situations where microorganisms can normally be found. Chemical substances called antiseptics are used to eliminate or decrease the proliferation of microorganisms. Among the most common antiseptics we have:

Some factors should be considered for the choice of the appropriate antiseptic:

Asepsis is defined as the absence of infectious organisms. It is also the process or procedure performed under conditions in which contamination by microorganisms is minimized.

The word “asepsis” comes from the Greek prefix of negation a (no) and the word sepsis or sepsis meaning “rot.” The etymological definition would be the absence of rot.

For asepsis, a set of hygiene methods and procedures is carried out in a given environment, in order to avoid contamination of it by infectious and pathological agents.

Aseptic techniques are intended to eliminate microorganisms and thus prevent contamination. Among some of the aseptic measures, the following can be mentioned: sterilization of objects, cleaning of all areas, application of isolation techniques, use of clothing and appropriate utensils.

It is the process of organic waste removal. It is carried out using detergents and washing with water.

It is the process of eliminating microorganisms on objects using chemical agents known as disinfectants.

Disinfectants are classified according to their activity in:

Some viruses and prions are not affected by disinfectants.

Sterilization is the process of eliminating all microbes, including bacteria, spores, viruses, and fungi. Several sterilization processes are used:

Historical perspective of antisepsis and asepsis

At the end of the 18th and 19th centuries, mortality was very high when surgical procedures were performed, not for failures in the procedure but for post-operative infections.

In the mid-nineteenth century, Oliver Wendell Holmes and Ignaz Semmelweis recognized that there was a high mortality rate in hospitalized women, after childbirth, due to puerperal fever. Semmelweis noted that this was happening with women attended by medical students who had been in the morgue before. Then, a strict handwashing regime was implemented, which resulted in a reduction in mortality from 11.4% in 1846 to 1.3% in 1848.

Louis Pasteur discovered that bacteria caused damage to the wine. This inspired the English surgeon Joseph Lister (1827-1912) to consider the intervention of bacteria in human diseases. In 1865, Lister began applying phenol (a substance used in the treatment of sewage) as an antiseptic in wounds and handwashing in surgical procedures, reducing deaths from infections.

In 1889, American surgeon William Stewart Halstead (1852-1922) noted that one of his nurses was allergic to handwashing antiseptics. He ordered the Goodyear rubber company to manufacture gloves and since then the practice of wearing gloves was standardized to protect the patient as well as surgeons and assistants.

More recently there is the discovery of antibiotics and their prophylactic use and laminar airflow systems with positive pressure in reducing post-surgical infections. Difference between Antisepsis and asepsis