The cell membranes are mainly composed of a lipid bilayer that hinders the passage of certain types of substances. This barrier function allows the cell to maintain solute concentrations in the cytosol different from the extracellular environment or intracellular compartments. 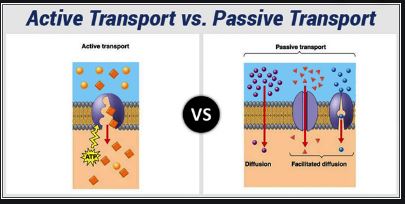 What is passive cell transport?

Passive transport is the process that allows the passage of molecules and ions through the cell membrane without a source of energy.

The concentration gradient or concentration difference of a species between the two sides of the membrane is the impulse that determines the movement and direction of passive transport.

When the solute has a charge (positive or negative), the difference in potential between the two sides of the membrane (membrane potential) can also boost transport. In this case, the combined concentration gradient and electrical gradient form the electrochemical gradient conductive force.

The molecules and ions can pass through the membrane passively through different mechanisms: simple diffusion facilitated diffusion or osmosis.

Small non-polar molecules such as oxygen O 2 and carbon dioxide CO 2 dissolve easily in the lipid membranes. Small polar molecules without charge, such as H 2 O water and urea, also diffuse through the membrane in a slow or restricted manner. In general, lipophilic or fat-related molecules can cross the membrane by simple diffusion.

The two main classes of membrane proteins that facilitate the traffic of molecules in and out through the lipid membrane are:

Osmosis is the movement of water through a semipermeable membrane when on one side there is a solute that cannot cross the membrane. In osmosis, only water movement occurs.

What is active cell transport?

Active transport is the process by which the cell transports material against its concentration gradient, using ATP as its energy source.

At least three types of proteins with the ability to perform active transport are described in the cells. Below its description.

Lysosome enzymes work at pH around 5 and the lysosome maintains that pH by the proton pump.

The ATP pumps transport the solute coupled to the ATP hydrolysis, that is, the ATP releases a phosphate group (PO 4 -3 ) and transforms into ADP. The energy released in hydrolysis is what “pumps” the solute from one side of the membrane to the other.

There are three types of ATP pumps:

The transport of an ion or molecule is concomitant with another solute. In this case, the solute in greater concentration on one side of the membrane passes to the other side and promotes the movement of the solute from lower to a higher concentration. Conveyors driven by ionic gradients are also called secondary active transport.

For example, the sodium-dependent glucose cotransporter of the small intestine. In this case, glucose and sodium from inside the intestine are absorbed into the intestinal cell.

Epithelial cells of the intestine or kidney have a large number of sympathizers that are driven by the Na + sodium ion gradient, being more concentrated outside the cell.

An anti-carrier or exchanger transfers solutes in opposite directions. For example, the sodium / proton Na + / H + antiporter enters sodium into the cell and proton exits outside.

Predominant in bacteria and archaea, this solute transport is carried out from lower to higher concentration thanks to the collection of light energy. For example, bacteriorhodopsins and halorhodopsins are proton pumps activated by light.