Difference Between Exocytosis And Endocytosis is that The endocytosis is the transport of particles and substances inside the cell, while the exocytosis is intracellular transporting material outward. Both processes are due to the need of the cell to maintain with its surroundings an exchange of materials for its survival. 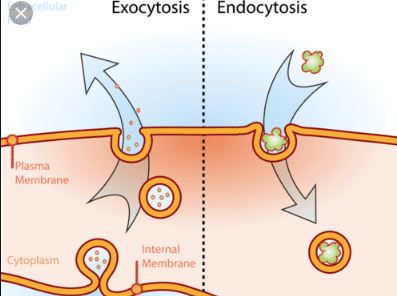 Both endocytosis and exocytosis are mechanisms involved in the transport of materials through the plasma membrane. This is a type of active mass transport that requires energy in the form of ATP.

Difference Between Exocytosis And Endocytosis in Tabular Form

Endocytosis is the process by which cells capture material from the extracellular environment. In this process, the material to be ingested gradually closes in a small portion of the plasma membrane, which is introduced or invaded into the cell, to finally separate from the membrane and form an endocytic vesicle.

Cells use endocytosis to trap nutrients, such as vitamins, cholesterol, and iron. Depending on the size and consistency of the material to be ingested, there are two types of endocytosis: phagocytosis and pinocytosis.

Phagocytosis is the endocytosis of solid and large particles. Another way of looking at the phagocytosis process is like “the cell eating.” An example is unicellular organisms, such as amoebas, that use phagocytosis to feed.

In multicellular higher organisms, there are cells known as “professional phagocytes,” such as white blood cells or leukocytes and macrophages. These cells are responsible for defending the body against invading agents, such as bacteria, viruses, and parasites.

The gallbladder resulting from phagocytosis is called phagosome. These phagosomes fuse with lysosomes, which are the intracellular organelles responsible for the digestion of the material.

Pinocytosis is the internalization of dissolved molecules in a fluid. Pinocytosis can be translated as “the drinking cell”.

Exocytosis is the cellular process to release material abroad. It is the reverse process of endocytosis. From the Golgi apparatus, vesicles are formed to fuse with the plasma membrane. There are two ways to execute secretion: constitutive and regulated.

In this way, the vesicles fuse with the plasma membrane continuously. This is the way the cell eliminates waste.

To activate this pathway, some special signal is required within the cell that tells you that you must release the products within your secretory vesicles. This pathway is mainly found in cells specialized in secreting products, such as neurons, those release neurotransmitters, or endocrine cells that release hormones.

In some cells, such as endothelial cells, the material is transported from one side of the cell to the other. This process is known as transcytosis.

At the cellular level, your body is a very busy place. Your cells create energy, secrete chemicals, expel waste and many, many other functions. Two key functions to which their cells are dedicated are exocytosis and endocytosis.

The definitions for exocytosis and endocytosis are as follows:

The basic mechanism in which a cell performs exocytosis or endocytosis is the same. Both make use of vesicles for molecular transport. Vesicles are small sacs covered by membranes that move around a cell. They are generally used for storage and transport because they are completely covered by a membrane, inside they can have a different composition than that of their cell.

How are vesicles used for exocytosis and endocytosis?

You could say that endocytosis creates vesicles and exocytosis uses and can potentially destroy vesicles.

Exocytosis is used for the following purposes:

Endocytosis is used for the following purposes: