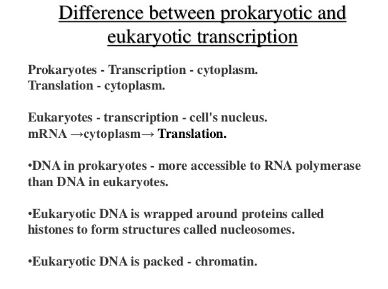 The DNA of prokaryotes is very packaged unlike the DNA of eukaryotes, which is also associated with histones.

In prokaryotes, there is only one type of polymerase. In contrast, in eukaryotic RNA, there are three polymerases (rRNA, mRNA, tRNA).

Transcription in prokaryotes and eukaryotes

The enzymes responsible for the synthesis of any RNA are RNA polymerases. Unlike eukaryotic cells, in which there are different types of enzymes depending on the class of RNA transcribed, prokaryotic cells possess a single type of RNA polymerase, which is a complex enzyme formed by several subunits.

The process described below is that studied in E. coli bacteria, and serves to illustrate the complex machinery of synthesis of any RNA.

Initiation. The RNA polymerase enzyme is a multimeric protein that is associated with DNA but only binds to the promoter in the consensus sequence, when the cr subunit is integrated into the complex, forming the holoenzyme.

The confirmation of the holoenzyme, that is, of the complete functional enzyme, is adequate to bind strongly to the start signal and promote the start of transcription in nucleotide +1. Once the first nucleotides have been synthesized, the subunit is no longer necessary and is released from the transcription machinery.

Elongation. One of the differences between RNA polymerase and DNA polymerase is that the former can begin the synthesis of an RNA from a template without the need for an initiator (primer or primer ).

Another difference is that the process of RNA synthesis does not need a 3’→ 5 ‘exonuclease activity for proofreading, since RNAs are going to be ephemeral molecules that, unlike DNA, are not perpetuated from cell to cell.

The same gene can be read by several polymerases at the same time, which will move along the DNA chain producing multiple copies of RNA or “transcripts.” These copies usually contain failures since RNA polymerase makes a mistake every 104 added nucleotides.

The first nucleotide of an RNA has three phosphates attached to the 5 ‘ position and will form a 3′ → 5 ‘phosphodiester bond with the second ribonucleotide. The formation of this bond will be similar to that described for the polymerization of DNA.

The enzyme itself will unwind the double DNA helix as the machinery progresses, forming a transcription bubble of about 18 nucleotides.

The double DNA helix will close again as the RNA copy is made. During transcription, sections of hybrid helices will be formed between synthesized RNA and template DNA with an intermediate secondary structure between helix A and B of the DNA.

RNA polymerase will continue transcription of the gene until, in its path, it finds a termination signal. The RNA polymerase is a “processive” enzyme, that is, it performs several cycles of the same catalytic reaction (formation of a phosphodiester bond) without dissociating from the substrate or template after each catalytic reaction.

This is very important since said enzyme will be able to catalyze hundreds of reactions of binding of a ribonucleotide to the nascent chain without separating from the template and therefore not needing to start over.

Termination. Once the RNA polymerase has copied the termination sequence that indicates the end of the message, the RNA polymerase is cleaved from the DNA ending the transcription of the RNA. This process requires the collaboration of certain protein factors, such as the Rho (p) bacteria factor.

Terminator is independent of factor p. It contains repeated nucleotide sequences in reverse orientation, followed by an eight base pair segment A: T, so that, when transcribed, they mate with each other forming a hairpin structure that promotes the dissociation of the elongation complex and the release of the RNA. Difference Between Prokaryotic And Eukaryotic Transcription

Terminator is dependent on factor p. In this case, it needs the presence of a ring-shaped protein composed of six subunits, the p factor, which recognizes the terminator transcribed in the RNA when it leaves the interior of the polymerase and releases the newly formed mRNA from the ternary complex of which it is part (RNA polymerase + RNA + DNA) using the energy obtained from the hydrolysis of ATP.

It does not form a fork structure like the independent terminators of the p factor. Difference Between Prokaryotic And Eukaryotic Transcription