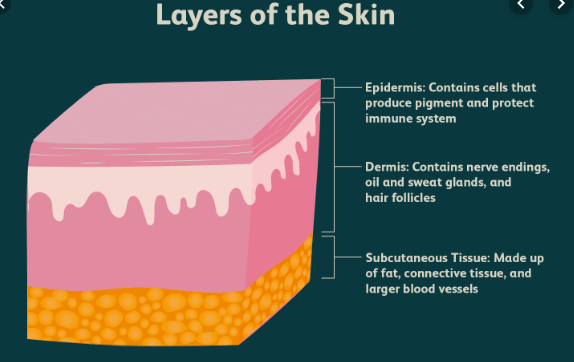 It is the layer of the skin that is located under the epidermis and is firmly connected to it by the inner face of the basement membrane.Its function is protective, it is the second line of defense against trauma because it is up to 30 times thicker than the epidermis.

The deepest layers of the dermis contain the hair follicles with erecting hair muscles and sebaceous glands.

Another function of the dermis is to nourish the epidermis because it has blood vessels while the epidermis does not. It has a thermoregulatory function, it contracts if it is cold and expands if it is hot, it has sweat glands.

It is the one that offers support to the epidermis thanks to the dermal papillae and the collagen fibers it contains.

It is formed by the papillary layer or upper dermis and the reticular layer or deep dermis.

It is the outer layer of the skin and represents the most important barrier of the organism to the environment. It has a thickness of up to 1.5 mm in the palms and soles of the feet and 0.1 mm in the eyelids.

The epidermis lacks blood supply and is nourished through diffusion from the dermis. It has keratinocytes, Langerhans cells, melanocytes, Merkel cells, and inflammatory cells.

The epidermis has 4 or 6 layers depending on the region of the skin, the outermost layer is known as the cornea layer, followed by the translucent layer, granular layer, spiny layer, and the basal layer.

Its function is to protect against the growth of bacteria and fungi and UV rays.

Differences between dermis and epidermis