Difference Between Cofactor And Coenzyme

When we talk about cofactors, we quickly think of enzymes, coenzymes and, if you have training in biochemistry, you may also think of prosthetic groups. All these terms are closely related and differentiating them is not always easy. In this article, we will try to clearly define what is Difference Between Cofactor And Coenzyme and what is a cofactor, what types exist and what characteristics are specific to each one. 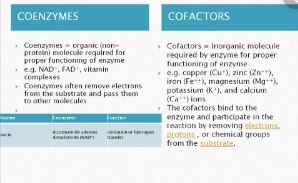 Forget the definitions that differentiate a cofactor from a coenzyme according to its inorganic or organic nature. Although these definitions are very common on the Internet, they are wrong definitions.

What is a cofactor?

A cofactor is defined as any substance of a non-protein nature that is required for a protein to exert its biological activity. Most often this protein is an enzyme, hence the term cofactor is used practically as a synonym for enzymatic cofactor, but it must be clear that they are not exactly the same since a cofactor can exert its function in a non-enzymatic protein.

Almost 100% of the metabolic reactions that occur at any time in the cells of our body are catalyzed by enzymes, organic macromolecules of a protein nature that increase the speed of chemical reactions that without their action would occur very slowly.

Enzyme activity can also be affected by the presence of other substances. Substances that inhibit the action of enzymes are known as enzyme inhibitors, while substances that favor their activity are known as enzyme activators. Activators increase the speed of enzymatic reactions but do not necessarily have to be required for the enzyme to show activity.

However, some enzymes necessarily require other substances to show their activity or catalyze a specific reaction. You could say that these enzymes need “mandatory activators” and it is these mandatory activators that are called cofactors. The cofactors can be of very varied nature and characteristics, from small mono-atomic metal ions to organic molecules of certain complexity such as coenzymes and prosthetic groups.

Therefore, a coenzyme and prosthetic group are two types of cofactors. Let’s see in more detail what each of them is and what characteristics define them.

The cofactors can be classified according to different criteria, one of the most common is according to its organic or inorganic nature:

Metal ions are very common cofactors and of them, the most frequent are metal ions composed of one or two atoms. In humans, the list of these cofactors frequently includes iron, magnesium, manganese, cobalt, copper, zinc and molybdenum, all of the essential trace elements in our diet due precisely to their role as cofactors.

Another type of inorganic cofactors is iron-sulfur centers. These centers are complexes formed by sulfide groups, usually from the amino acid cysteine, linked to two or four iron atoms. In addition to the functional role as cofactors, iron-sulfur centers play a fundamental structural function in the spatial conformation of the protein. Some examples of proteins with iron-sulfur centers are ferredoxin, NADH dehydrogenase or Coenzyme Q-cytochrome c reductase.

Some cofactors include inorganic elements bound to organic molecules. These cofactors are usually included in the group of organic cofactors because of the greater weight of the organic fraction. For example the heme group.

Coenzymes and prosthetic groups are two specific types of cofactors of organic nature. They are usually small molecules, usually of mass less than 1000 Da. To differentiate between the two, the strength or type of union between the cofactor and the protein is usually taken care of: a coenzyme binds weakly while a prosthetic group binds strongly and generally cannot be separated from the protein if it is not denatured.

This differentiation between the coenzyme and the prosthetic group is not very clear since there is no exact definition between a strong union and a weak union. In addition, the same cofactor can weakly bind to one protein and make it more strongly to another. Even some substances traditionally considered coenzymes have a covalent binding to their enzyme, which would go against this definition because it is a clear strong type of bond.

The use of the term cofactor to designate a substance other than the protein and substrate that is required for the activity of the protein and the use of the term prosthetic group to designate substances that remain covalently bound to the protein has also been proposed. throughout the catalytic cycle. A coenzyme could fall into both groups depending on the mode of action. In any case, there is still no unequivocal consensus adopted by the scientific community. Difference Between Cofactor And Coenzyme

Examples of coenzymes and prosthetic groups

The most common examples of coenzymes are vitamins and derivatives. Not all vitamins act as coenzymes but it is a very frequent activity among them. In the group of vitamins B, we find numerous examples, such as coenzyme A, which is a derivative of pantothenic acid (vitamin B 5 ), or the cofactors NAD + and NADP +, which are derivatives of niacin (vitamin B 3 ).

The heme group is a typical example of a prosthetic group. In general, the proteins contained in the heme group are known as hemoproteins. This group includes proteins with important biological functions. For example, hemoglobin and myoglobin (involved in the transport of O 2 ), several cytochromes (involved in the transport of chemical energy) or the enzymes catalase and endothelial nitric oxide synthase. Difference Between Cofactor And Coenzyme