the major Difference Between Sensory And Motor Neurons is that Neurons are the cells that allow the normal functioning of nerve tissue. Thanks to them, there is communication between the stimuli, the signals, the desires, and the brain, since they are put together in a way that generates 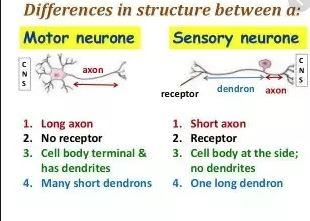 interconnection between them, operating together, and not individually, as a kind of network.

Each of them has a specific function, which can consist of the reception of signals and external stimuli, conduct these signals as a nerve impulse and also act as an intermediary between two neurons.

Neurons can be classified according to two types of aspects, one of them is its shape, that is, unipolar, bipolar and multipolar, and according to its function, that is, sensory, motor and interneurons.

In the next post, we will talk about the classification of neurons according to their function

The motor neurons are of the multipolar type and are those that carry the orders of movement from the CNS brain to the organs that are going to execute the action, that is, they are responsible for the contraction of the muscles in humans effectively.

The sensory neurons are those that receive stimuli from receptors of sensation to the brain. They are usually unipolar, but there are also bipolar.

They transmit the sensations of heat, such as when something is too hot and causes a burn, cold, pain, and pressure on the outer surface of our body. That is, receiving information from outside and transferring it to the central nervous system.

Explanatory image of a sensory neuron:

Interneurons, meanwhile, are found within the brain, of the CNS, and are those that process information and act as intermediaries between the others, between sensory neurons and motor neurons. It is estimated that almost all existing neurons are of this type.

Explanatory image of the interneurons: