Difference Between Ligaments and Tendons is that When it comes to staying connected to our body, it is important to know a little about the tissues that help join our parts. It is easy to confuse tendons and ligaments, but these two connective tissues are not the same thing and actually perform different functions in the body. This is what you need to know 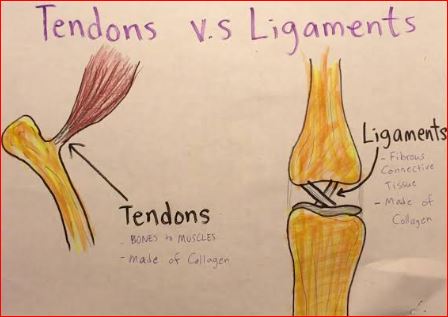 Tendons connect muscles to bones. These bands of fibrous tissue, resistant but flexible, attach the muscles to the bones of the skeleton. Essentially, tendons allow us to move, think of them as intermediaries between muscles and bones. You’ve probably heard of the Achilles tendon, which connects the calf muscles with the heel bone. This tendon is vulnerable to ruptures and tendonitis, we must be careful and stretch the calf muscle to keep the tendon flexible.

Although they are similar to tendons,   the ligament is an anatomical band-shaped structure, it is composed of resistant fibers that connect the tissues that bind the bones in the joints. The ligaments are slightly elastic, so they can stretch and gradually lengthen, thereby increasing flexibility. But if they extend longer than they should, the ligaments can be overloaded and endanger the integrity of the joint that they are supposed to stabilize, so we must stretch with caution. The term double articulation actually refers to people who have highly elastic ligaments, which allow the joints to move in more extreme positions than most people. Although no ligament plays an important role in Greek myths, the ligaments found in the knee, especially the ACL (anterior cruciate ligament), often talk a lot about these, as they are prone to rupture.

The difference between a tendon and a ligament

The ligament is a band of fibrous connective tissue composed primarily of collagen fibers (which makes it very resistant). It ensures the union of two bones forming a joint and also serves to join the organs between them. The ligament does not have the ability to contract. Its function is rather to limit the excessive movements of a joint, to stabilize it and avoid injuries.
Sometimes, movement can cause the ligament to stretch excessively. For example, a soccer player who makes a sudden change of direction with his foot on the ground may be injured and have a sprained or torn anterior cruciate ligament of the knee. When a ligament is stretched, it does not have the ability to return to its original length. This can cause joint hypermobility. If the ligament is partially torn, healing will usually occur naturally, but if it is completely torn, surgery may be necessary to repair it.

The tendon also has a strong resistance due to the collagen fibers that compose it. The tendon connects a muscle with one or more bones. Its function is to transmit the force generated by the muscles to the bones to create the desired movement. In fact, when the muscle contracts, it pulls the tendon, which in turn pulls the bone to which it is connected, which creates a movement.

Tendons, such as ligaments, may be subject to stress such as repetitive work, direct trauma, exertion or excessive stretching. All this can cause different pathologies (tendinosis, tendon rupture, tenosynovitis, etc.) that can affect the strength and movement of the tendon.