A food chain is a linear illustration that represents how nutrients and energy flow between one organism and the next in any particular ecosystem. Food chains start from the producers of an ecosystem, such as plants, to the organism that feeds on plants and to apex predators that have no natural predators. Examples of apex predators include bears and killer whales. In some food chains, food chains end up with detrivores such as mealybugs or even decomposing organisms such as bacteria. There are two types of food chains, namely a grazing food chain and a detrital food chain. 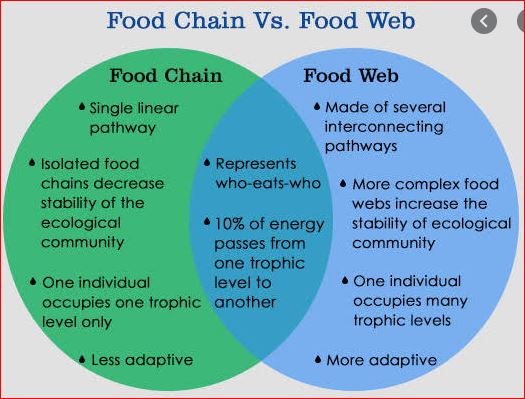 The atrophic network also called the consumer-resource system, is an intricate pattern that forms after food chains connect to show which species feed on each ecosystem. The food web has multiple producers and consumers. For example, a plant (a producer) is consumed by any number of consumers, such as gazelles. In turn, gazelles are devoured by any number of predators such as lions, cheetahs, hyenas, and others. Unlike a food chain that shows only one consumer of a particular organism, the food web has multiple consumers. In addition, in a food web, some species can perform multiple functions in the ecosystem and, therefore, is a more accurate description of an ecosystem.

Differences between a food chain and a food web

For the food chain, there is a greater risk of disturbances in the ecosystem it represents. For example, in a food chain where the bear eats deer, that ecosystem will be extremely disturbed if something greatly reduces the number or destroys the entire deer population. On the other hand, the removal of an organism from the food web has very little involvement in the ecosystem as a whole. In the scenario where deer are removed, then the bear will still have a lot of food from the other organisms it eats, such as the gazelle.

Food chains limit an organism in terms of improving their competitiveness and adaptability because there is only one food source. On the other hand, the food web provides the perfect condition for an organism to adapt and be highly competitive. As a result, the chances of survival of the organism increase considerably.