The Difference Between AIDS and HIV is that  HIV is the virus that destroys the immune system while AIDS is the final stage of infection. 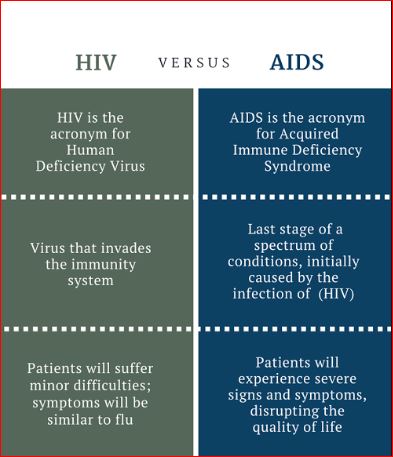 It is not the same to be infected with HIV than to have AIDS. It is important to know the difference between HIV and being sick with AIDS. They are two very different things that so far many people confuse and here we clarify the issue.

It is the virus that causes the infection and affects the immune system (defense system), which protects our body.

It is the stage in which the defense system is not able to protect against opportunistic diseases and environmental microorganisms.

3. HOW IS HIV TRANSMITTED?

HIV is transmitted sexually, 97% of the total cases; by vertical transmission, 2% (mother-to-child transmission) and by blood, with 1%.

4. HOW IS HIV NOT TRANSMITTED?

HIV is not transmitted in everyday contacts: kisses, caresses, public toilets, showers, coughs, sneezing, glasses, cutlery, food, workplaces, schools, gyms, swimming pools …
Nor is it transmitted through saliva, tears or sweat, not from insect bites or from contact with pets. Donating blood does not carry any risk of becoming infected.

5. SYMPTOMS
The first signs of HIV infection may be swollen glands and signs of the flu. They can occur and disappear a month or two after infection. Severe symptoms may not appear until past months or years.

Some common symptoms when having AIDS when you have opportunistic infections are chills, fever, sweats (especially at night), swollen lymph nodes, weakness, and weight loss.

The beginning of an antiretroviral treatment to treat HIV infection implies a compromise.
That is, medications should be taken every day and for the rest of the life of the infected. Following treatment is important, especially because not doing so increases the risk of drug resistance.

Antiretroviral treatment can prolong the time between HIV infection and the manifestation of AIDS. Modern polytherapy is highly effective, and a person infected with HIV who is receiving treatment could live a lifetime without developing AIDS.

A diagnosis of AIDS does not necessarily amount to a death sentence. Many people can still benefit from starting antiretroviral therapy, even once they have developed a disease characteristic of AIDS. Better treatments and preventive measures for opportunistic infections have also been developed to improve the quality and lifetime of infected people.