The Difference Between Frog And Toad is that The toads and frogs are very different, we can see at a glance. While it is true that they have a great resemblance, we can see clear differences between them. However, it is not as easy as we think. We will briefly review what the differences between toads and frogs are, and then we will discover how these two amphibians really are related. 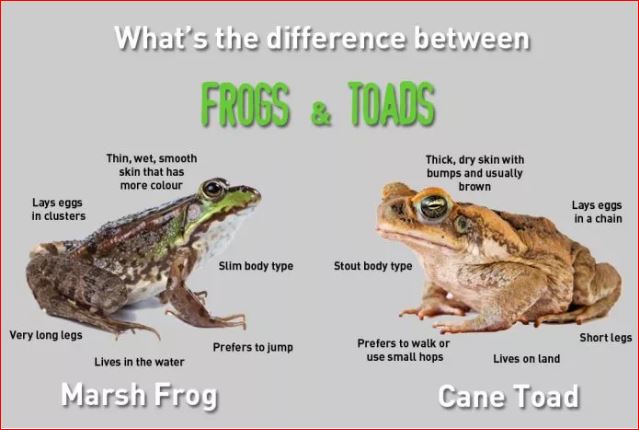 Differences between toads and frogs

Although they look somewhat similar, the physical differences are notable. The toads are more dry and rough skin, while frogs have it more moist, smooth and shiny. In turn, frogs are characterized by long and slender limbs that allow them to jump agilely, while toads have shorter limbs and are not as agile as frogs.

Regarding behavior, frogs prefer water and wetter habitats, while toads inhabit drier and dirtier places. Regarding their reproductive behavior, toads usually lay their eggs in a row, while frogs do it in groups together like a cloud.

Atelopus certus: According to its physical characteristics we would say that it is a frog, however, it is a species of toad, belonging to the Bufonidae family. The same goes for all species of the genus Atelopus.

According to Christopher Raxworthy, a specialist at the American Museum of Natural History, physical characteristics are not enough to differentiate exactly each species of frogs and toads. Thus, to be absolutely and completely sure which animal it is really, it is also necessary to analyze its cellular structure, since the difference is at the genetic level.

There are several differences between true frogs and true toads. Frogs have a soft and moist skin, which looks viscous. Toads are drier, with rough skin that looks very bumpy, like warts. From here comes the myth that you will have warts when touching a toad, however that is simply not true.

Toads have a strange smell and disgusting taste on the skin. This is to avoid the larger animals that would like to eat them. Frogs have thinner bodies than toads. The widest and fat-looking toads. Frogs also have longer legs and webbed hind legs, and toads do not have long legs to jump, as they move walking, and do not require webbed feet to swim, because they live on land. Frogs live in the water and jump everywhere.

In some parts of the world, especially in tropical regions near the equator, frogs and toads are very similar and the only way to differentiate frogs and toads is to look at their teeth and bones.