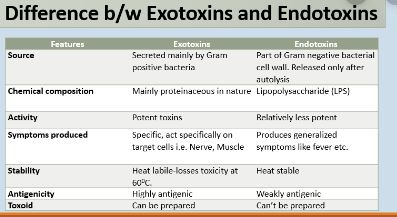 In gram-negative bacteria, there is endotoxin in the outer membrane of the cell wall. Endotoxins are lipopolysaccharides, which can be seen in gram-negative pathogenic bacteria such as Escherichia coli, Salmonella, Shigella, Pseudomonas, Neisseria, Haemophilus influenza, and Vibrio cholera. Bacteria must not be essentially pathogenic to have endotoxins. These toxins are released from bacteria that grow or are released due to the activities of certain antibiotics, or the function of phagocytic digestion

Exotoxins are soluble proteins, which can act as enzymes. Being an enzyme can catalyze many biochemical reactions, and it is reusable. A small amount of exotoxins is needed to make toxicity. They are secreted through their exponential growth or by their cell lysis to the cell envelope. Therefore, exotoxins are considered as an extracellular component. Both gram-positive and gram-negative bacteria produce exotoxins.

You May Also Like: What is Difference Between Catabolism And Anabolism?