Parts of Reptilian Brain: Over time, certain evolutionary improvements have been implemented in the brains of human beings that have allowed us to adapt to the different changes that have been presented to us and this is one of the main reasons why we have survived as a species It is said that our brain is 3 times higher than that of primates and at the same time it is made up of different areas that have been incorporated over time over time throughout evolution. 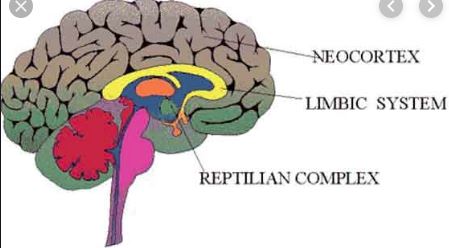 In this way, it has been found that there are three types of brains, which are the following: the reptilian brain, the emotional brain or limbic brain and finally the rational brain or neocortex. In this online Psychology article, we will talk about what the reptilian brain is: parts and functions. In addition, we will let you know in detail what this type of brain consists of.

What is the reptilian brain ?: definition

As we know the brain has been constantly evolving over more than 250 million years and throughout this process, it has been acquiring new functions and increasingly complex skills. The oldest brain, to which the limbic and the neocortex have been added later is the reptilian brain.

This brain was identified and developed through MacLean’s triune brain theory. The reptilian brain, also known as the R complex or reptilian complex, is what we share with other mammals and reptiles. It is mainly responsible for implementing our most basic and primitive functions, such as protecting ourselves from possible threats, defending ourselves and fleeing to ensure our own survival. He is also responsible for carrying out some unconscious and involuntary behaviors such as our breathing, blood pressure, temperature, balance, among others. The reptilian brain or reptilian complex occupies approximately 5% of our total brain mass.

Characteristics of the reptilian brain

This type of brain is not reflexive and, on the contrary, acts unconsciously and instinctively. Having as its main function to take care of our own survival, it is considered that it is also in charge of making it difficult for us to achieve our personal goals since it feels safe only being in a known terrain, however when it enters unknown terrain, it feels extremely threatened and prefers to flee and escape before facing something new.

Parts of the reptilian brain

The reptilian brain is formed by the reticular system, the cerebellum, the basal ganglia, and the brain stem. Below we will briefly explain what each of these parts of the brain consists of:

Functions of the reptilian brain according to psychology

The reptilian brain fulfills different functions in our daily life, then we will mention in more detail what they are exactly.