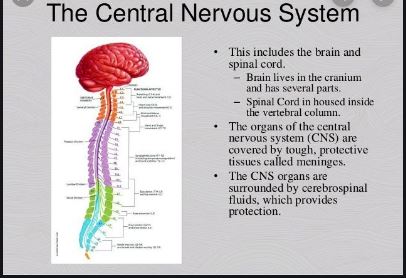 The CNS is characterized by being the core of our mental processing, in fact, it is in charge of treating the information that our senses collect so that we can understand it better. Do you want to know more about the Central Nervous System, its functions and parts? Then do not miss this interesting online Psychology article, in it, you will know the functions and parts of the Central Nervous System (CNS).

Parts of the Central Nervous System

Anatomy of the central nervous system

The CNS is protected by the skull, the spine and the membranes called meninges. It is formed by the brain and spinal cord, composed of millions of cells connected to each other, the famous neurons.

Next, we offer you a simple scheme so you can see how the Central Nervous System is divided.

Parts and functions of the brain

The brain is the upper part of the CNS, popularly known as the brain, this part of the Nervous System is made up of other regions (besides the brain).

This area is protected by the skull. At the anatomical level, the brain is composed of the following parts:

These parts and their functions are explained below.

It is the best-known organ of the central nervous system. The brain has numerous functions but in general, it is responsible for processing the information that comes from the five senses, as well as controlling movement, emotions, memory, cognition, and learning. It is the center of intellectual functions.

Anatomically, the brain is divided into two parts: Telencephalon and diencephalon.

The Telencephalon corresponds to the two cerebral hemispheres: the right and the left, communicated by nerve fibers called the corpus callosum. The outer part of the brain is known as the cerebral cortex formed by gray matter and white matter.

On the one hand, the left hemisphere is responsible for the movement and sensory perception of the right part of our body, logical reasoning, linguistic intelligence, and mathematical ability. On the other hand, the right hemisphere is responsible for the movements and perception of the left side, the vision in three dimensions, creativity, and imagination.

Four lobes are identified in the cortex of each hemisphere:

The Diencephalon is composed of different anatomical parts: hypothalamus, thalamus, and epithalamus.

It bridges spinal cord stimuli to reach the brain. Some of its functions are as follows: regulate the heartbeat, blood pressure, balance, and respiratory function. Regulates muscle movements such as running, walking, writing … and also maintains muscle tone and body posture.

Located on the spinal cord, the brain stem is divided into three anatomical regions: the bump and the midbrain.

Next, we show you a complete scheme with the main parts of the brain: