The Main Difference Between Rural and urban is that The rural and urban encompass a set of attributes that are associated with a region, locality or community, among other types of human groups.

Among the attributes that are associated with the rural are that an area has low population density, develops economic activities linked to the primary sector, has large areas of land and green areas, and lacks government administrative centers. 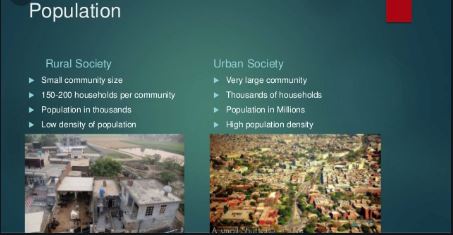 In the case of the urban, this includes attributes such as the presence of a high population density, that the main economic activities are those of the industrial and services sector, and the existence of governmental administrative centers and physical infrastructure.

It should be noted that there is no single way to define rural and urban. The criteria used to delimit their attributes are variable. It is possible to find characteristics associated with urban in rural areas and vice versa.

The rural refers to a set of characteristics that are associated with a locality or region, such as having a low population density or a reduced community of inhabitants. In a rural area, the main economic activity revolves around work with the environment, particularly in the primary sector.

The word rural comes from the Latin ruralis , and refers to that which ‘comes or is from the countryside’, or to an ‘open space’ (of land).

In this sense, the rural has been identified by the presence of large spaces of land in which there are small human settlements. It is common for infrastructure to be of less capacity, when compared to large cities (urban centers). They are generally regions with communities where there is a low population density.

There is less proximity between neighborhoods and houses. The houses are single-family. In addition, agricultural production and agricultural activities predominate in rural areas.

Generally, rural and urban are spoken of as opposites. That is, the rural is defined as the non-urban and vice versa, according to a series of criteria that are associated with each one. However, nowadays rural spaces and lifestyles in these places have changed. Aspects such as the diversification of the type of jobs, development of sustainable tourism programs and other ways of generating income have been present in the rural world.

As a general rule, rural areas have the lowest income in a country. According to the Food and Agriculture Organization of the United Nations (FAO), although poverty in rural regions in Latin America has declined since the 1980s, there is still a large gap between the income of urban and rural areas.

The urban refers to a set of characteristics that a locality or region has, as are a high population density, and economic activity related to the industrial sector and the services, and the presence of administrative centers and physical infrastructure (paved roads, aqueducts, electrical services, etc.).

The word urban comes from the Latin Urbanus, and refers to ‘what is related to the city’. Large cities are characterized by large buildings and high population density.

The physical infrastructure of the environment is an important criterion when qualifying something as urban. For example, in an urban region, there are buildings, residences, industry, and administrative centers, among others.

Transport and communication logistics also represents a widely used feature to define what is urban. The provision of transport services and their efficiency are used to compare urban and rural locations.

In an urban region, population density tends to be high. In countries like Mexico and Venezuela, populated localities or centers with more than 2,500 inhabitants are considered urban populations. This is a quantitative criterion to define which regions are urban (or rural).

The existence of administrative centers or that the communities are headwaters of a district are considered as criteria by different countries to define what is urban at the geographical or demographic level.

Another feature of the urban is that the most important activity in a region is linked to the industrial or services sector and not to the agricultural or agricultural sector.

In this case, it is considered that in an urban space most of the active population is dedicated to the industrial or services sector, and not to agricultural work.

Characteristics of the urban

The rural and the urban in Latin America

Each country uses slightly different criteria to define what is rural and urban. The main instrument used to determine which localities or populations are classified as rural or urban are national censuses, which are applied once every ten years in most countries.

The Organization for Economic Cooperation and Development (OECD) states that a population density of more than 150 inhabitants per square kilometer is the minimum amount for a region to be considered urban.

A qualitative criterion is functionality or economic activity that takes place in a region. For example, a characteristic of a region or rural area is that its main economic activity occurs in the primary sector (agriculture).

According to the Economic Commission for Latin America and the Caribbean (ECLAC) and the specialist in social and political studies, Sergio Faiguenbaum, some of the most used criteria to define rural and urban areas in Latin America are:

In the following table, you can see some of the criteria used to define urban and rural in several Latin American countries and in Spain

Different theoretical perspectives and even points of view, in general, define the attributes and criteria that each human space has. The dichotomous approach to the rural and urban proposes that both terms refer to opposite realities, where the rural is more backward or a previous step to the urban and modern.

Unlike this perspective, the focus on the rural-urban continuum proposes that the rural and the urban are part of a spectrum. It is not possible to establish a separation between the two, having only a gradual difference in the characteristics of each.

At the end of the 20th century, with the new rurality, the rural and the urban are no longer seen as opposites. The effects of capitalist development and technological and industrial advances allow the presence of attributes traditionally associated with the urban in rural spaces.]

The division of the rural-urban as opposites follows the line of thought of sociologists such as Karl Marx (1818-1883), Max Weber (1864-1920) and Émile Durkheim (1858-1917). This approach establishes a dichotomy of the rural and urban as if they were opposite points. That is, a locality is rural or urban, but not both at the same time.

In any case, agriculture and work in the primary sector remain important in defining the rural.

The new rurality is a perspective of the late twentieth century that proposes that the rural environment can acquire characteristics that have been traditionally associated with the urban, such as the diversification of the labor market and the introduction of industry and services in rural areas.

In this way, the new rurality defies traditional notions about the rural. This takes into account the points of integration between rural and urban in today’s world and the impact of capitalist development.

It suggests that the rural is not a previous step to the urban, nor less modern, but that the rural spaces are contemporary and differ according to each region.

CHARACTERISTICS OF THE NEW RURALITY