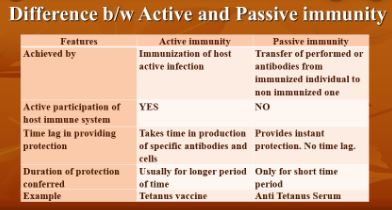 It produces immunological memory It does not produce immunological memory
When antigens enter the body, antibodies and other specialized lymphocytes are produced. Antibodies are introduced from an external source. For example, a mother introduces antibodies to a fetus through the placenta and to an infant through breast milk.
There are no side effects It may cause reactions
Immunity does not occur immediately Immunity develops immediately

Immunity can be classified into two major types: natural and acquired.

The body’s ability to defend against the presence of pathogens is called natural immunity. This immunity is characteristic of each race or each species and is transmitted by inheritance.

Acquired immunity can be classified into two types:

·         Active, which is the immunity acquired through a specific disease, either by its pre-clinical, clinical or even non-transparent manifestations (without manifestations); It can also be classified as artificial active when obtained through the application of vaccines.

What is active immunity?

During artificially acquired active immunity, antigens are artificially introduced into the body in the form of vaccines. The immune response to the first exposure to the pathogen is called the primary response. The secondary response occurs in the second exposure to the pathogen and generates a much stronger immune response. Due to the production of memory cells, active immunity lasts a long time.

What is passive immunity?

Similarities between active and passive immunity

Difference between active and passive immunity

Active immunity: Active immunity refers to immunity, which results from the production of antibodies by the person’s own immune system in response to direct contact of an antigen.

Active immunity: The pathogen has direct contact with the body.

Passive immunity: The pathogen has no direct contact with the body.

Passive immunity: The body can react to antisera.