Comparative Differences between of Nervous and Endocrine system 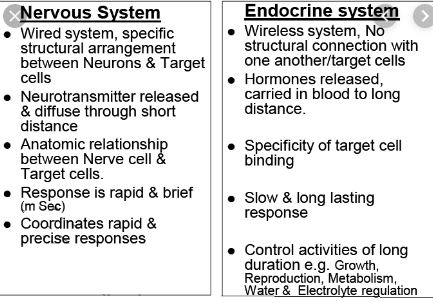 The nervous system is the set of organs responsible for receiving, integrating and transmitting information from outside and from the internal environment, as well as coordinating and controlling the body’s responses to that information.

The nervous system is one of the animal’s main organ systems that are responsible for coordinating biological activities inside the body through the network of specialized cells called neurons. There are two main divisions in the nervous system, one that is the central nervous system (CNS) and the other that is the peripheral nervous system (PNS). Invertebrates, the CNS is composed of the brain, spinal cord, and retina, while the PNS includes sensory neurons, ganglia, and connecting neurons. The nerve cells connect to each other in a very complex way, where all nerve paths would be possible.

Neural pathways are the connections of neurons that pass signals between body parts of an animal. Electrochemical waves or pulses are generated and travel through the axon of the neuron through the nerve pathways in order to trigger the necessary actions. Some nervous activities can be controlled, while others are autonomous.

The associated endocrine glands are found in the kidneys, digestive system, gonads, and some other places. The interesting fact about the endocrine system is that it is a chemical information system. Development or growth, metabolism, and temperament have been the functions mainly maintained by the endocrine system. Hormonal regulation is slow and long-lasting. These prolonged functions of the hormones could last about two weeks, sometimes, but the time to start the function of the time of secretion could go up to two hours.

The coordination process is determined by a series of structures that are the following:
1) Receivers: They form sense organs. Specialized in capturing the stimuli and are responsible for initiating the transmission of information.
2) Sentimental nerve pathways: These are the transmission pathways that drive nerve impulses from receptors to modulators ( afferent pathways ) * afferent: which brings.
3) Modulators: Interpret the impulses they receive and prepare the precise orders. They often store information in memory form.
4) Motor nerve pathways: They take orders from modulators to effectors (efferent pathways)
5) Effectors: They are the organs that capture the impulses transmitted by motor pathways and carry out the action ( response).

The nerve impulse: Neurons are specialized to receive and emit signals. The transmission of these signals is called the nerve impulse transmission and constitutes an electrochemical message that goes from neuron to neuron. This phenomenon lies mainly in the plasma membrane that separates the nerve cell from its extracellular environment.