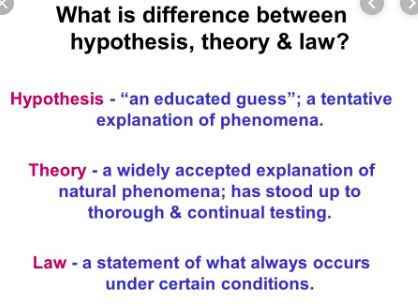 observable phenomenon. It can also be a reasoned prediction of a possible causal correlation between several phenomena. On the other hand, a theory, within science, is a proven and justified explanation through a series of proven and verified facts. A theory must always be backed by evidence. On the other hand, a hypothesis is just a possible result, which can be tested and refuted.

Examples of Theories and Hypotheses.

Theory: Einstein’s theory of relativity. This is still a theory because it has been tested and verified countless times, and the results continue to confirm Einstein’s conclusion. However, just because your conclusion has become a theory does not mean that the tests have been stopped to prove your theory. Science is a continuous process.

Hypothesis: One might think that a prisoner who learns to work during the time he is being held is less likely to relapse once released. This is a hypothesis, an informed assumption. The scientific method can be used to test this hypothesis, refute it or determine that further studies are necessary.

*Note. The fact that a hypothesis could not be proven as false does not mean that it is true. Only after some time of investigation and verification, it may be heading to become a theory.

People often refer to a theory when in fact what they mean is the hypothesis. For example: “Drinking coffee after two in the afternoon causes migraine.” This is a theory, not a rule. In fact, this is a logically reasoned proposal that is based on observation. Let’s say, for example, that during two different days, a person had a migraine after drinking coffee. Even if this were true, migraine could have other reasons. This observation is merely a reasoned possibility, it is verifiable and can be refuted, this makes it a hypothesis, not a theory.